A thick complex of mafic to ultramafic volcanic rocks 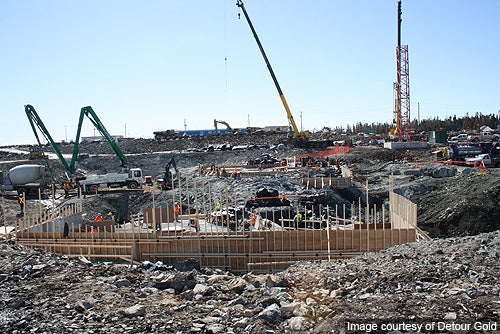 The Detour Lake mine is a gold deposit located in Ontario, Canada, approximately 8km west of the Ontario-Québec border and 180km north-east of Cochrane.

The 376km² property lies within the premises of the former Detour Lake mine that was operated between 1983 and 1999 by Placer Dome and produced 1.8 million ounces of gold.

The property was acquired by Detour Gold in 2006. At the time of the acquisition, the property contained a near-surface gold resource of 3.4 million ounces.

A feasibility study for the development of the mine was completed in May 2010, indicating an annual production potential of 650,000oz of gold over a 21.5-year estimated mine life.

Construction on the project began in January 2011 and gold production commenced in February 2013. The project achieved commercial production on August 12, 2013. It produced 75,672oz of gold in the third quarter of 2013.

The cost of exploration programme targeting the five high potential target areas of the project increased from $14m to $20m.

The construction of the project was completed with a budget of $1.5bn. In February 2011, Caterpillar Financial provided $105m for acquiring the mining equipment provided by Toromont Industries.

"The cost of exploration programme targeting the five high potential target areas of the project increased from $14m to $20m."

The mine lies within the north-western section of the Abitibi greenstone belt (AGB) in the superior province of the Laurentian plateau, also known as the Canadian Shield. AGB is characterised by several east-west trending synclines of volcanic assemblages and intervening domes of synvolcanic and/or syntectonic plutons.

Within the deposit area, supracrustal rocks consist of a thick complex of mafic to ultramafic volcanic rocks known as the Deloro assemblage. The complex occurs in structural contact to the south with the younger aged Porcupine sedimentary assemblage. The contact is defined by a local scale thrust zone known as the Sunday Lake deformation zone (SLDZ).

Gold mineralisation is spatially related with the trace of the SLDZ. Mineralisation is hosted primarily towards the north of the SLDZ within its hangingwall, along a 3km strike length within a 200m-wide corridor. It is believed to have concentrated after the tectonic juxtaposition of the Deloro assemblage and porcupine sedimentary assemblage. Within the hangingwall of the SLDZ, mineralisation forms a stockwork of gold-bearing quartz veins that branched out from a flexure coinciding with the northern limb of a shallow west dipping antiform.

The second style of mineralisation at Detour Lake is found within the hangingwall of the SLDZ overprinting the early aged auriferous stockwork with low sulphide content. Mineralisation is hosted within broad partially vertical mineralised envelopes in different types of rocks.

Sub-parallel to the SLDZ orientation, the mineralisation divides into multiple sub-vertical domains. It is mainly contained in discrete shear-hosted or fault-fill and extensional quartz vein networks and broad mineralised zones that are lithologically controlled and have a weak vein association.

"At the time of the acquisition, the property contained a near-surface gold resource of 3.4 million ounces."

During the initial three years of operation, approximately 28Mt of lower-grade ore will be stockpiled for process throughout the life of the mine. The open pit has been designed with up to 10m-high benches and a 35m wide haul road at a 10% maximum grade.

Processing of ore is done in a typical gravity, cyanidation and CIP (caron-in-pulp) facility with an initial operating capacity of 55,000tps that can be ramped up at a later stage to 61,000tpd. The grinding circuit comprise of two parallel lines, each consisting of a twin semi-autogenous (SAG) mill and a twin pinion ball mill. The mills feature two 7,500kW variable speed drive motors.

The larger gyratory crusher and a secondary crushing circuit ensure the supply of higher throughput of fine feed (75mm) to the SAG mill. Additional crushing capacity in the pebble crushing circuit complements this system.

Approximately 30% to 40% of gold is recovered in the gravity circuit. The remaining gold in ore is returned to cyanidation and CIP gold recovery. Following carbon stripping, gold will be treated through electro-winning cells before gold pour. To reduce operating costs, the cyanide solution is recycled to the circuit head. The remaining stream is detoxified through an SO2/air system prior to tailing deposition.

The contract for the procurement, construction and management (PCM) was awarded to AMEC Americas on 30 June 2010. BBA was appointed in early 2010 to provide detailed engineering services for the project.

The contract for the mining camp was awarded to ATCO Structures & Logistics (ASL) in November 2010.

Mintap
Mintap is the official distributor of the C-Gap closed side...
SUBSCRIBED