Expand
Putu mine contains an estimated 2.37 billion tons of iron ore.
Liberia is on the western coast of Africa.
Iron ore from the Putu mine will most likely be converted into steel and exported worldwide. 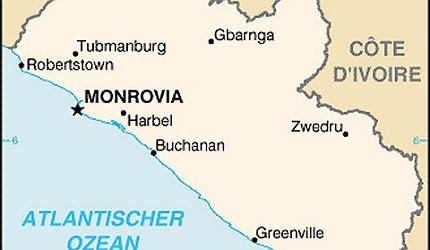 Putu iron ore project is part of a 425 square kilometre exploration tenement located in south-east Liberia. The mine includes a 12km ridge of banded iron formation which consists of haematite and magnetite.

"In 2011, Severstal’s indirect subsidiary Lybica Holdings entered into an agreement with Afferro to purchase its 38.5% interest in the project."

A pre-feasibility study of the project commenced in the second quarter of 2010, following a 60,000m drilling programme.

Severstal is planning to invest $66m in 2012 for the development of the project. First production is expected to start in 2017.

The Mineral Development Agreement for the project was formally approved by the Liberian Government in September 2010.

Putu was earlier owned by Afferro Mining (38.5%) and Severstal Resources (61.5%). In December 2011, Severstal’s indirect subsidiary Lybica Holdings entered into a purchase agreement with Afferro to purchase its 38.5% interest in the project. The agreement was approved by Afferro in January 2012.

An updated resource estimate for the mine was announced in February 2011. The new estimate doubled the resources to 2.37 billion tons graded at 34.1% iron from the initial estimate of 1.08 billion tons at 37.6% iron.

"The Mineral Development Agreement for the project was formally approved by the Liberian Government in September 2010."

Inferred MBIF resources within the deposit total 668Mt at a grade of 37.8% iron, 0.5% aluminium oxide, 40.8% sulphur dioxide and 0.18 phosphorus pentoxide. A zero cut-off grade has been estimated for the resources.

An additional resource of 364Mt of magnetite BIF is expected to exist below the 300 relative level.

Iron ore geology and mineralisation at the deposit

Exploration and drilling at Liberia’s Putu mine

The Marampa mine is a brownfield haematite iron ore mine located approximately 150km north-east of Freetown in Sierra Leone, West Africa.

A 4,000m drilling programme, including 11 drill holes, was completed on a 2.6km section of the ridge in 2010. The maximum drill depth was been 400m. Drilling on four out of the 11 holes ended in mineralisation.

The best results include 91m at 61.3% iron oxidised BIF haematite and 232m at 40.8% Fe magnetite. To interpolate the main grade of the minerals, ordinary kriging was used.

Besides the drilling programme, a 208m-long historic drilling adit located in the middle of the Putu range, approximately 300m below the ridge line, was re-opened and made secure. The adit was brought to a halt while it was still in mineralised material of significant grade.

On re-opening it fully, samples at 2.0m intervals returned a nominal iron content of 42.7% iron. To measure the content of magnetic iron minerals, a magnetic susceptibility test was also conducted on the samples.

Along the adit, results revealed a substantial increase in magnetic susceptibility at nearly 66m from the mouth of the adit. At that point, the overlying haematitic material was around 60m thick.

The deposit is situated favourably within a distance of 100km from the Atlantic coast. Situated between the mine site and the coast, the terrain slopes gently and does not feature any major topographic characteristics.

Three deep water port sites are found proximal to the mine site, in addition to possible rail routes of 110-140km long. The routes will not require any infrastructural upgrades, such as earthworks and bridges.

The stretch from the coast to the south of Putu does not feature any major port. However, large bulk carriers can be accommodated if deep water is found inshore in all the three port sites.