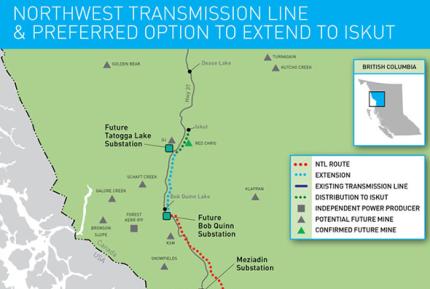 Pre-feasibility study (PFS) for the project was completed in May 2014 and the supplementary PFS (SPFS) was completed in October 2014. The project involves a 5.4Mtpa run-of-mine (ROM) underground operation, and is estimated to have a mine life of 38 years.

Site preparation works started in July 2014 with the aim of clearing the site to allow movement of the heavy equipment. Commercial production is anticipated to begin in the second half of 2016.

Spread over more than 800km², the Groundhog anthracite coal project comprises 46 granted coal licences and 36 coal licence applications. The high-ranking anthracite deposit is capable of delivering a sub 10% ash product with ultra-low volatile content and high-calorific value. Coal resources at the deposit are of anthracite to semi-anthracite rank, occurring in multiple stratified seams.

The Groundhog coalfield lies in the northern Bowser Basin, bordered by the Stikine Arch to the north and by the Skeena Arch to the south. The deposit is amenable to both underground and open cut mining.

"The deposit is amenable to both underground and open cut mining."

The project lies under the Currier Formation of the Bowser Lake Group, which hosts the coal-filled strata and comprises more than 30 coal seams within a stratigraphic section of 400m.

The Groundhog project is estimated to contain JORC-compliant measured, indicated and inferred resources of 1.57 billion tonnes, which include 609.2Mt (million tonnes) in the Groundhog north mining complex.

Anthracite mining and processing at Groundhog

The underground mine will employ an adit style or cut-and-cover portal method to mine and haul the anthracite. The mining equipment will include conveyors, shuttle cars and dump trucks for transportation.

The run-of-mine anthracite will be washed in a coal handling and processing plant (CHPP), which is expected to produce approximately 3.4Mtpa of saleable anthracite.

The CHPP will employ a two-phased approach, with each phase expected to treat 2.5Mtpa of ROM material. The plant is proposed to be financed through an off-balance build-own-operate-transfer (BOOT) arrangement and will consist of an enclosed plant, stockpiles of ROM anthracite, product anthracite and coarse reject, feed, and product conveyors.

The CHPP will be installed in a centralised location at the mine site, and is expected to serve the two entry portals into seam 70 and single entry into seam 40. The final anthracite product will be trucked to Stewart port for export to Asia.

Offtake of coal from Groundhog project

Non-binding offtake marketing memorandums of understanding (MOUs) are in place with major counterparties in Japan and Korea for the offtake of high-grade and ultra-high-grade anthracite produced at the Groundhog project.

Atrum Coal signed a binding equipment finance agreement with China Coal Technology & Engineering for the supply and finance of mining equipment for the Groundhog anthracite project. Under the agreement, CCTE will provide $100m for the first stage of the Production Finance Package in addition to supplying the mining equipment.

It is also proposed to provide $250m finance to expand the underground mine to 5.4Mtpa steady state production beyond 2017 production rates and finance further mine expansions in the Groundhog North zone.

Major works include the construction of a private haul road that creates a 215km direct access corridor from the North Mine to the Port of Stewart.

Atrum Coal has a right for port capacity of 3Mtpa at Stewart port under a land reservation and terminal services agreement with Stewart Bulk Terminals. It also has a 5Mtpa port allocation secured under a MoU with Stewart World Port.

"It also has a 5Mtpa port allocation secured under a MoU with Stewart World Port."

Diesel generators will be used in the initial two years to generate power needed for the anthracite mine, while a power transmission line to the North-West Transmission Line near Highway 37 will be laid in the third year.

DMT Geosciences was engaged to conduct bulk sample design and engineering studies, Norwest Corporation for coal handling and preparation plant and process engineering design, and Knight Piesold for conducting a study on the hydro-geological and environmental aspects.

SRK Consulting was engaged for conducting geochemical characterisation of the anthracite and rock partings.