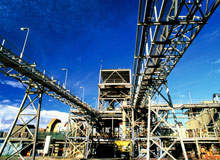 The Mt Muro Gold deposit is located in Indonesia’s Central Kalimantan (Borneo) less than 100km south of the equator.

Straits Resources operates the project under a third-generation contract of work agreement signed in 1985 with the Government of the Republic of Indonesia and covering an area of 47,940ha.

Operations by the previous owner ceased in mid-2002 and the plant was placed on a care and maintenance order.

Following a detailed examination of the existing processing plant, coupled with exploration success, an in depth study was carried out to prove the feasibility of reopening the operation on a limited throughput basis. This work kicked-off in the second half of 2004 and Mt Muro’s processing plant was commissioned mid-2005.

The Mt Muro mine lies within central Kalimantan where mineralised hydrothermal breccias and veins formed during and after the waning stages of maar-diatreme-related volcanic activity occurred.

Mining activity is carried out on a wet hire basis by contractors with ore being supplied from pits within reasonable haulage distance of the processing plant. Equipment includes a small scale truck and excavator fleets supplemented with articulated dump trucks for trickier terrain. All grade control and mine planning is conducted by Straits personnel.

The ore is a mixture of hard rock and alluvial material, the result of the multi-pit nature of the operation with all the pits at different depths depending on the degree of oxidisation. Currently, target ore supply is approximately 30,000t a month.

This resulted in a large build-up of high-grade scats inventory on the ROM, capable of future processing. The reduced conversion rate was traced to poor crushing efficiency in the circuit which prevented the ball mill from operating at the required throughputs. Straits resolved the problem by restarting the SAG mill.

In the original plant, ore comminution consisted of single stage, open circuit crushing, followed by SAG and ball milling in series. Mill feed went to a primary leach stage and the clarified leach liquors from which moved forward to a Merrill Crow gold recovery process.

The thickened slurry was processed through a carbon in pulp facility for final gold and silver recovery. All of these unit operations are now utilised within the refurbished plant with the exception that the ball mill is now used as the sole milling step. Scats are produced and stockpiled for recrushing and processing on a campaign basis.

The expected production for Mt Muro in 2008 is approximately 80,000oz AuEq (gold equivalent). This will depend largely on the ability for the ball mill to achieve the target grind size at a feed rate of 50tph, and gold and silver recovery of 94% and 89% respectively.

By the end of 2005 the ball mill was able to produce at 70tph largely as a result of the ore blend regularly consisting of a greater amount of eluvial ore than was planned, as well as some pump optimisation work.