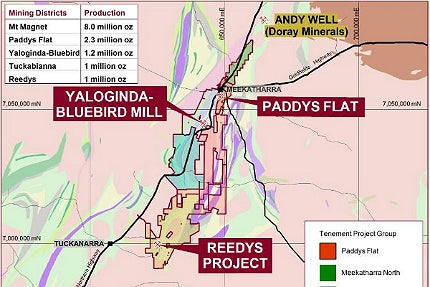 Meekatharra Gold Operation (MGO) of Reed Resources is located in the Murchison District of Western Australia.

The MGO includes the development of three mining regions, namely Yaloginda, Paddy’s Flat and Reedys. Bluebird gold deposit that is part of the Yaloginda region is the currently mined deposit at MGO.

Geology and reserves of the Western Australian mine

“Meekatharra Gold Operation (MGO) of Reed Resources is located in the Murchison District of Western Australia.”

Meekatharra gold mine is a part of the Greenstone belt. The mineralisation at MGO consists of massive stock-work ore bodies and high-grade vein style deposit mineralisation.

The Meekatharra gold project is estimated to have a reserve balance of 752,000oz of high-grade gold.

The combined measured and indicated resources have been estimated at 3.6moz.

Reed has devised a three stage strategy for the development of Meekatharra gold project.

The first stage involves exploitation of the mining region within 6.5km of the gold processing plant at Bluebird. It is expected to produce 134,000 ounces of gold from the Bluebird, Batavia, Whagamata and Surprise open-pit sources.

The second phase will focus on extracting the 618,000 ounces of gold reserves at Yaloginda, Paddy’s flat and Reedy project areas.

The stage three will be developed alongside the first and second stages. It will use the latest targeting and exploration techniques to convert gold resources of 2.8 million tonnes to reserves.

Mining and ore processing at Bluebird

The mining operations at Bluebird open-pit mine began in October 2012. The initial feed to the processing plant consisted of low-grade ore and mineralised waste. It helped in maintaining the gold in circuit levels and in establishing the plant operating parameters.

The mine commenced gold production in January 2013. It has a metallurgical recovery rate of approximately 92% and produced 20,500 ounces of gold until May 2013.

Processing plant and other facilities at MGO

The processing plant at MGO has a processing capacity of three million tonnes per annum at a recovery rate of 90%. It consists of a single stage crushing unit, open stockpile, semi-autogenous grinding (SAG) and ball milling unit and tailings and services areas.

The Bluebird processing plant is installed with Metso’s C125 primary crusher unit. The crusher has a capacity of 250 to 850 tonnes per hour.

A diesel power station consisting of eight generators was constructed at the site. Each generator includes a Cummins KTA50 G3 diesel engine with a 3.3kV alternator.

Contractors involved with the MGO

GR Engineering Services was awarded the contract to install a heavy-duty primary crusher at the mine. It also participated in the detailed study of the processing plant.

Minepower was awarded the stage one mining contract for the Meekatharra Gold Project. The scope of contract includes drilling and blasting, civil and crusher feed works.

Coffey Mining was awarded the contract for estimating the reserves at Yaloginda region.

The contract for providing catering and facilities to Meekatharra Gold Operations was awarded to Morris Corporation.

Australian Portable Buildings was awarded the contract for upgradation and installation of new facilities at the accommodation village.

The contract for providing flight services to and from Meekatharra was awarded to Maroomba Aviations.

Andy Well is an open pit and underground gold mine located within the Meekatharra North Project in the North Murchison region of Australia.

Barnes Hill nickel-cobalt mine is located in the Tamar Development Corridor and is situated near Beaconsfield in Tasmania, Australia.