Blackthorn Resources, Glencore Xstrata and the Government of Burkina Faso 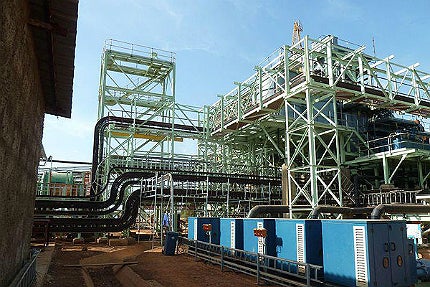 Perkoa zinc mine is located at Sanguie, 120km away from Burkina Faso’s capital city Ouagadougo. It is the first large scale base metal mine in the country. Its estimated mine life is 12.5 years.

Blackthorn Resources acquired the Perkoa project in January 2005. The feasibility study of the mine was completed in December 2005.

The first delivery of zinc concentrate from Perkoa was made in July 2013 and the first shipment of 13,000t will be exported in September 2013.

Offtake agreements for purchasing the concentrates have been signed with Xstrata Zinc, Votorantim Metals and Louis Dreyfus Commodities.

"The mine is being developed by a joint venture of Glencore Xstrata, Blackthorn Resources and Burkina Faso government."

The Birimian rocks have similarities with the major gold sequences that are found in the deposits of Ghana and Mali.

The sulphide ore deposit consists of two sub-parallel sulphide-rich bodies, the footwall and the hanging wall bodies, occurring within the rhyolitic tuffs.

The mineralisation at Perkoa is present in a sequence of dipping meta-sedimentary rock units and includes granitoids of various ages. Huge deposits of barium are also found.

The JORC-compliant ore reserves at Perkoa are estimated to be 6.3 million tonnes at 14.5% zinc. It is equivalent to 873,400t of contained zinc metal at a cut-off rate of nine percent.

Mining and ore processing at Perkoa

The mining at Perkoa is carried out using both underground and open pit methods. The open pit mining is conducted mainly for waste removal.

The zinc processing plant at the mine has a capacity of 720,000tpa and includes separate units for crushing, dense media separation, milling and flotation.

The second ball mill to be installed in the fourth quarter of 2013 is expected to increase the throughput capacity to one million tonnes per annum.

The zinc concentrate will be transported by road to the nearest rail point. It will then be carried to Abidjan port in Côte d’Ivoire for export by the Bolloré railway line.

Construction and infrastructure at the zinc mine

Construction of the zinc mine began in March 2007 and the box cut was developed in 2008.

The tailings dam facility included a return / storm water dam for capturing and reusing the water at the processing plant. The water facility for the project was provided from the Seboun Dam.

Power supply for the mine is enabled by five 2MW diesel generators arranged at the mine site.

Glencore provided $140m financing for the development of the mine. It arranged $50m through direct equity, $70m in loans and $20m as working capital.

Additional funding of $80m was made by Glencore in 2013 for working capital requirements and construction costs.

DRA Mineral Projects was awarded the engineering, procurement and construction contract for the Perkoa mine.

The contract for construction and mining of the underground operation was awarded to Byrnecut Mining.

Banlaw Africa was awarded the civil works contract and is responsible for developing the box cut at Perkoa.

Transamine was awarded the sales administration services contract. The contractual scope includes transportation of zinc from the Abidjan port to the smelting customers.

Kiaka Gold Project lies in the southeast part of Burkina Faso, West Africa. The project’s exploration permit covers 183.80km². It is owned and operated by a subsidiary of Volta Resources, Kiaka Gold. GEP Minerals holds a ten percent interest in the project.

The Tanlouka Gold Project is located towards the east of Ouagadougou, the capital city of Burkina Faso, West Africa.