Expand
The WBJV Project 1 platinum mine is located approximately 35km north-west of the town of Rustenburg, South Africa. Image: courtesy of Htonl.
PTM began construction of the WBJV Project 1 platinum mine in 2010 and expects to start production in the fourth quarter of 2015. Image: courtesy of Platinum Group Metals.
Construction of a flotation circuit being undertaken at WBJV Project 1. Image courtesy: of Platinum Group Metals. 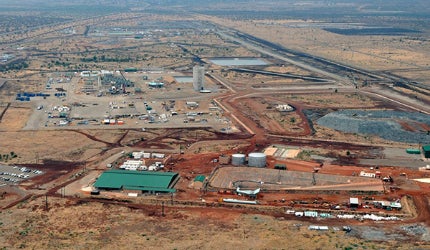 Feasibility study for the WBJV Project 1 was completed in July 2008 and formal construction began in 2010. Mining rights for the project were granted in April 2012, and first production is anticipated in the fourth quarter of 2015. The mine life is estimated to be more than 20 years.

The project is anticipated to have a two-year ramp up period before achieving steady-state production of 275,000oz of 4E (platinum, palladium, rhodium, and gold) in concentrate a year. It is expected to create approximately 2,700 jobs.

Marikana is located near Rustenburg, about 112km from Johannesburg in South Africa.

The WBJV, comprising Projects 1, 2 and 3, is located alongside Anglo Platinum’s Bafokeng Rasimone Platinum mine in South Africa.

PTM holds 82.9% stake in Maseve Investments 11, the operating company of WBJV Projects 1 and 3. The remaining 17.1% is owned by Wesizwe Platinum through its wholly-owned subsidiary, Africa Wide Mineral Prospecting and Exploration.

Project 2 is equally owned by WBJV and Africa Wide.

The WBJV Project 1 platinum mine is located on the western limb of the Bushveld Igneous Complex, an enormous body of rock that cooled from a molten intrusion two billion years ago, and surrounding sedimentary footwall rocks.

The complex is spread over more than 330km and is well-known for its layering and continuity of economic horizons mined for platinum, palladium, and other platinum-group elements chrome and vanadium.

"The mine is estimated to contain 4.11 million ounce (Moz) of platinum, palladium, rhodium, and gold."

Mining and processing of ore at WBJV Project 1

The run-of-mine ore material from the underground mine will be transported to the surface either by dump trucks or underground conveyor delivery chute. It will be conveyed to a vibrating grizzly feeder (VGF), from where the oversize will be fed to a jaw crusher.

The crushed material will be milled in two stages, primary and secondary, comprising ball mills with a trommel in closed-circuit with hydrocyclones. The resultant cyclone material will pass through the flotation circuits to produce a concentrate, which will be thickened before producing a final filter cake. The filter cake will be loaded and dispatched to a smelter located 40km to the southeast, in the city of Rustenburg.

Power required for the mining operations at Project 1 will be supplied by Eskom. Water will be sourced from Magalies Water Board’s Vaalkop dam, located approximately 60km from the WBJV site.

Off-take of 4E elements produced at the WBJV Project 1

Maseve will sell the entire concentrate produced at WBJV Project 1 to Rustenburg Platinum Mines (RPM), a subsidiary of Anglo American Platinum (Amplats), under a mine concentrate off-take agreement entered in April 2013.

Financing of WBJV Project 1 platinum mine

The project is funded by a $260m senior loan facility by a syndicate of lead arrangers comprising Barclays Bank, Absa Capital, Caterpillar Financial SARL, Societe Generale, and The Standard Bank of South Africa.

PTM entered a term sheet with Sprott Resource Lending Partnership (Sprott) in September 2014 for a senior secured operating loan facility of up to $40m for the development and operation of the WBJV Project 1. It further entered a credit agreement in February 2015 with a syndicate of lenders led by Sprott for a senior secured loan facility of up to $40m.

In September 2014, PTM entered an agreement with a syndicate of underwriters, led by BMO Capital Markets and GMP Securities, for the sale of 207.6m common shares for gross proceeds of approximately $110m. The net proceeds are proposed to be invested in the second phase development of WBJV Project 1.

Contractors involved with the platinum mine development

DRA Mining was awarded the engineering, procurement, construction, and management contract for the WBJV Project 1 platinum mine.

JIC Mining Services (JIC), based in Johannesburg, was contracted to develop twin 1,200m underground decline tunnels into the centre of the platinum deposit.

EnI Electrical, part of the Zest WEG Group, was awarded a contract by DRA for the supply of electrical equipments for the project.