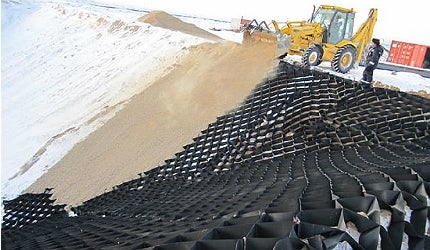 Benkala is a porphyry copper mine located in north-west Kazakhstan within the Ural mountain range. It is 100% owned by Frontier Mining and operated by its wholly owned subsidiary KazCopper.

Benkala was discovered in 1968 and is being developed as an open-pit operation. The mine area has a flat landscape and the water table lies about 25m below the surface, making it ideal for heap leaching.

The mine features good infrastructure, including a new two-lane highway and the Aktobe-Kostanai railway line. New 550kv power lines will provide electricity for the mine.

In January 2012, Sberbank Kazakhstan provided $29m for the development of the mine. The funds will be used for expansion of the mine and to carry out further drilling activities.

Benkala mine is made of granodiorite intrusions in a volcanosedimentary sequence containing tuffs and sandstones.

"In January 2012, Sberbank Kazakhstan provided $29m for the development of the mine. The funds will be used for expansion of the mine and to carry out further drilling activities."

Copper mineralisation at Benkala is contained in the granodiorite and is tightly connected with quartz-sericitic metasomatism. The mineralised zone occurs in the form of a truncated cone and is 800 x 1,200m in size.

The Benkala mine was explored during the Soviet era between 1976 and 1979, with 21,800m of drilling. The drilling activities identified a main mineralised zone including a 30m thick near-surface secondary zone (oxide zone).

It contains chalcocite and small amounts of bornite below 40m of surficial cover.

In 2006, the mine’s previous operator Coville Intercorp carried out confirmatory drilling programme which confirmed the mineralised zone which was identified during the Soviet era.

Frontier carried out drilling in the oxide mineralisation between 2008 and 2010. About 61 holes were drilled, totalling 7,729m.

Mining and extraction at Kazakhstan’s copper mine

Mining will be carried out through a 270m wide open pit. The pit is 950m long and 25m deep. Ore will be extracted by three hydraulic excavators.

Hitachi loaders, Komatsu dozers and a Caterpillar grader will be used at the mine.

Initial mining activities will target the oxide zone of the mine.

"It is 100% owned by Frontier Mining and operated by its wholly owned subsidiary KazCopper."

The extracted ore will be first crushed in two stages to a size of 20mm using a jaw crusher and VSI crusher. Ore will then be agglomerated using sulphuric acid and sent to the heap leach pad for leaching. The heap leach pad is located to the west of the pit and is one kilometre by three kilometres in size. Ore will be stacked in 6m lifts on the pad.

Following leaching, the ore will be sent to the SX-EW plant for processing. The plant has a capacity of 7,000t and includes crushing and grinding facilities, a laboratory, leaching pads, a workshop and communication and power cabling. Frontier is planning to expand capacity of the plant to 10,000t and to 20,000t by 2014/15.