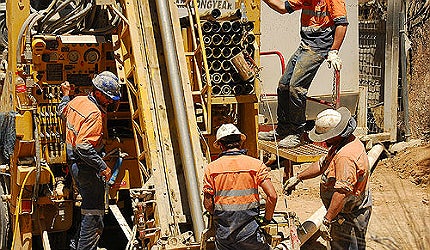 The Dargues Reef gold mine is located in New South Wales (NSW) in Australia, approximately 60km south-east of Canberra, directly north of the town of Majors Creek. The mine was owned by Cortona Resources, which merged with Unity Mining in January 2013.

On 14 April 2011, Cortona signed a memorandum of understanding (MoU) with GBF Mining and Industrial Services for mining of the deposit. The mine will produce an average of 50,000oz of gold per annum in the first six years of production. A feasibility study completed in November 2010 confirmed the viability of an underground mine.

Unity Mining started pre-construction earthworks at the mine in February 2013. Production is planned to begin in the first half of 2015. The project has however been on hold since November 2013 due to delay in completion of technical studies and funding.

As of June 2014, technical studies were underway while the feasibility study has been completed.

The financing arrangements made with Deutsche Bank were, however, terminated following the merger. The CommonWealth Bank agreed to provide $45m for the project in October 2013.The mine holds 1.615Mt of gold graded at 6.3g/t Au.

Geology and mineralisation at the Australian gold mine

"In August 2011, Deutsche Bank was mandated by Cortona to provide a debt facility of A$37m ($38.1m) for the development of the Dargues Reef mine."

The deposit lies within the Lachlan fold belt, a composite organic belt that underwent four phases of folding, uplift and intense compression. It forms part of altered granitoid rocks of the Devonian aged Braidwood Granodiorite. The western and eastern contact of the granodiorite dips gently and steeply to the west and east respectively. Multiple east-south-east and south-east oriented faults and a second set of north-north-east trending structures intrude the Braidwood Granodiorite.

Gold mineralisation is hosted as several distinct lodes within areas of intense alteration of the Braidwood Granodiorite. The formation of the mineralisation is marked by two events. The first event relates to the deposition of euhedral and subhedral pyrite and the related early phase alteration. The second event is the concentration of irregular pyrite comprising several inclusions of gold, chalcopyrite, bismuth, sulfosalts and galena.

The lodes measure between five metres and 15m in width and strike up to 140m in length, with a downdip extension of up to 450m. The structurally controlled lodes dip steeply and trend east-west and east north-east to west south-west. The Big Blow lode is the thickest and most consistent segment of mineralisation. It extends 115m in strike, is open at depth and has a southerly dip of between 70 and 85 degrees. The lode intersects at approximately 700 to the east with the main lode.

The lodes follow the east west oriented fracture system in the granodiorite. The fracture system is well defined next to the diorite dykes. A north-south trending fault disrupts the dykes and mineralisation.

The lodes are associated with hydrothermal quartz-sericite-calcite-pyrite alteration assemblages. Up to 80m from the lodes, a large envelope of propylitic alteration is observed in outcrop at Dargues Reef. Alteration minerals include white mica, epidote, carbonate, illite, montmorillonite, chlorite and kaolinite.

Mining and processing at Dargues Reef

"On 14 April 2011, Cortona signed a memorandum of understanding (MoU) with GBF Mining and Industrial Services for mining of the deposit."

The stoped out zones will undergo a back fill-past fill process to facilitate maximum ore extraction. Backfill material will also include waste rock to reduce haulage to surface and the storage of surface tailings.

The processing plant will recover 50% of gold through a standard gravity process. It will comprise of a crusher, ball mills, gravity circuits and floatation cells.

A sulphide concentrate will be produced with the remaining gold. The plant will adopt a three-phase crushing and coarse grinding process. Cyanide will not be used, resulting in an environmentally friendly gold processing facility.

Two phases of reverse circulation (RC) drilling were successfully completed during 2009-2010, targeting the top zone of 150m to 200m.

In order to complement the Dargues resource, drilling at near mine shallow resources was commenced. A 4,000m RC drilling programme at the Major Creeks commenced in September 2011 and principally focused on such resources, including the Chainman’s, Scarlet, Carmine and Thompsons prospects.

Transport and handling at Dargues Reef gold mine

Gold concentrate will be trucked to the processing plant at London Victoria gold mine, situated approximately 400km away from the Dargues Reef gold mine, to produce gold dore.