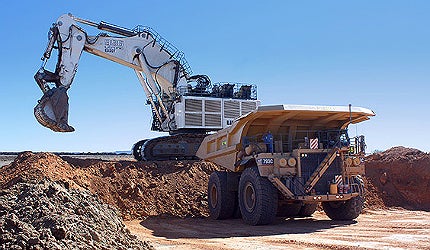 Xstrata acquired the deposits from Exco Resources in June 2011, for $175m, to form the Mount Margaret project. Open pit mining operations at the mine began in July 2012. First ore from the A$124m ($122m) project was produced in August 2012. The mine was, however, put under care and maintenance in March 2014 following completion of E1, which is one of the five open pits at the mine. Processing of the stockpiled ore mined from the E1 North pit will be processed by end of June 2014.

Mining and processing at Mount Margaret

“The mine consists of the E1 and Monakoff copper deposits eight kilometres east and 21km south of EHM.”

Recovered ore is sent to the EHM for processing through the on-site concentrator. The project helps in fully utilising the existing capacity of the concentrator.

The EHM concentrator has a processing capacity of 11mtpa of ore. It can produce 350,000t of concentrate annually.

Recovered ore is first crushed and ground in a series of mills. The ore is then mixed with water and chemicals to separate copper and gold from other materials.

In the flotation process, minerals attach themselves to bubbles and float to the surface of the flotation cells. This enables the minerals to be collected and separated. The mineral-rich mixture is treated with water to give rise to a copper-gold concentrate. The remaining waste or tailings are sent to the magnetite extraction plant.

Background to the Australian deposit operations

Mount Margaret Mining Project was undertaken as part of Xstrata’s plans to increase the life of the EHM operations and fully utilise the available infrastructure.

“The life extension project included construction of the magnetite extraction plant which commenced operations in December 2010.”

The EHM open pit operations began in October 1997. To extend the life of the mine, a pre-feasibility study was carried out in 2006. Based on the results, an A$26m project to construct an underground decline commenced in November 2007.

Open pit mining was completed and mining at EHM transitioned to underground operations in December 2011. The project increased the life of the mine by 12 years to 2024.

The life extension project also included the construction of the magnetite extraction plant which commenced operations in December 2010. The plant treats the magnetite tailings recovered during the copper-gold extraction process. It consists of a combination of cyclones and magnetic separators which recover magnetite. The plant recovers about 1.2mtpa of magnetite to be sold as a by-product to Asia.

The magnetite extraction plant processes the tailings from the Mount Margaret mine as well. The life extension project and Mount Margaret mine together improved the overall production levels of the EHM operations. They strengthened the economics of the EHM operations by fully utilising the existing infrastructure. The two projects created approximately 700 full time jobs and 330 construction jobs.