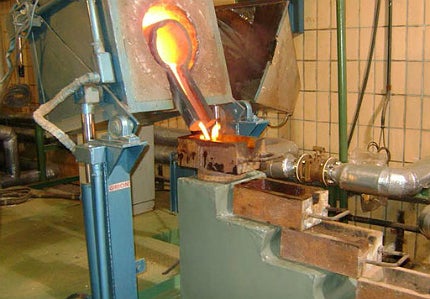 Tucano open cut gold mine is located in Amapá, Brazil. Beadell Resources acquired the rights for the Tucano mine in 2010.

Beadell completed the Definitive Feasibility Study for the Tucano gold project in May 2011 and started mining in June 2011.

The construction of the carbon-in-leach (CIL) gold processing plant began in July 2011 and first gold was poured in December 2012.

"Beadell completed the Definitive Feasibility Study for the Tucano gold project in May 2011 and started mining in June 2011."

Duckhead is the major deposit of the Tucano project and possesses high-grade oxide gold deposits. It is located at a distance of nine kilometres from the CIL gold processing plant.

Oxidised shear zones host the gold mineralisation at Tucano mine. The zone dips towards the south-west region and is connected to the main iron ore bearing banded iron formation (BIF).

The Tucano mine area is filled with a dipping and cross cutting pegmatite sill. The main contact zone of Tap deposit is located between BIF and clastic rocks.

The mineralisation occurs 200m below surface. The gold resources remain open along strike and at depth.

The Tucano mine has reserves of approximately 1.9 million Oz (moz) of gold. The combined measured and indicated JORC-compliant gold resources have been estimated at 5.14moz.

Reserves are expected to increase with the addition of Duckhead pit values, which are yet to be determined.

Mining operations at Tucano commenced in June 2011. The feed for the processing plant was extracted from the Urucum, Tap AB and Tap C pits.

The main areas of concentration were the Tap D valley and the Tap AB eastern wall cutback. TAP D valley pit formed the site of the tailings facility.

The CIL processing plant has a capacity of 3.5 million tonnes per annum. The gold elution circuit has a pour capacity of approximately 25,000 Oz of gold.

Iron ore deposits and infrastructure at Brazil’s Tucano mine

The Tucano mine also contains huge deposits of Ibaterine iron ore. The iron ore deposits are located two kilometres south of Tap AB gold deposit and form part of the BIF which hosts the gold mineralisation.

"Construction of the carbon-in-leach (CIL) gold processing plant began in July 2011 and first gold was poured in December 2012."

An iron ore concentrate plant has been constructed at the back-end of the CIL gold plant to extract high-grade iron ore from the CIL tailings.

The plant is estimated to produce 500,000t per annum of iron concentrate. It includes a circuit section made up of three drum magnets and three cleaning drum magnets, along with a ceramic filter for moisture reduction in the magnetite product.

Construction activities at the Tucano mine involved the major civil works for the semi-autogenous grinding (SAG) mill, crusher and CIL tanks.

The power supply for Tucano Mine is provided by a 13.8KVA substation connected to the Caoraci Nunes hydroelectric power station in Porto Grande.

Macquarie Bank provided $110m financing facility for the development of the Tucano Gold Project. The facility expires on 31 December 2014.

Ausenco was awarded the engineering, procurement, construction and management contract for the processing plant at Tucano. The contract is worth $80m.

The contract to conduct cost study was awarded to ProMet Engineers. The study was conducted to determine the cost of magnetic iron extraction from the gold tailings at the iron ore processing facility.

The Mara Rosa Project is a gold mine located in the Mara Rosa village, in the state of Goiás in Brazil.