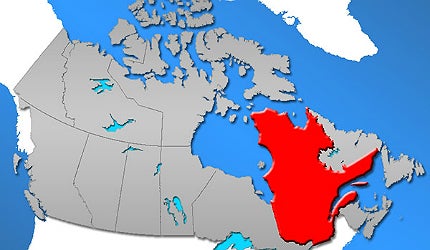 IAMGOLD’s Doyon Division includes the Doyon and Mouska underground gold mines. Located in north-western Québec, Canada, the property is spread across an area of 2,258ha. The mines produce about 24,000 ounces (oz) of gold annually.

Doyon mine commenced its operations in 1980 and was closed in December 2009. IAMGOLD is currently focused on the life extension of the Mouska mine and development of the Westwood project.

"The Doyon and Mouska mines are part of the Cadillac-Bousquet gold belt of the Abitibi County region in Quebec."

The Westwood deposit was discovered in 2004. The deposit is located two kilometres away from the Doyon mine. Commercial start-up of the Westwood project is expected in early 2013 with annual production of 190,000oz.

Mine life of the deposit is estimated to be 19 years. Cut-and-fill mining is expected to be used at the Westwood mine to recover ore.

The Mouska mine life extension project was approved by IAMGOLD in the fourth quarter of 2009. Stockpiling of ore produced at the mine will be carried out in 2012, for processing in 2013.

The Doyon processing mill is being refurbished and a sewage treatment plant is being built. The refurbished plant will process the ore from the Mouska mine and the Westwood deposit.

Geology and reserves of the gold mines

The Doyon and Mouska mines are part of the Cadillac-Bousquet gold belt of the Abitibi County region in Quebec.

"IAMGOLD completed 23,000m of diamond drilling at the Westwood project during the first quarter of 2012."

The region is one of the biggest gold mining areas in Canada, containing several deposits such as La Ronde, Bousquet 2 and Bousquet 1.

Inferred resources of the Westwood deposit are estimated at 9.41mt graded at 11.3g/t.

The Westwood deposit contains gold mineralisation similar to the Doyon mine. It contains VMS-type mineralisation of the Bousquet formation. Gold rich VMS deposits include LaRonde Penna and Bousquet 2-Dumagami and Warrenmac.

Exploration and drilling at the Doyon Division

IAMGOLD completed 23,000m of diamond drilling at the Westwood project during the first quarter of 2012. A total of 11 holes were drilled during the period. The drilling activities will help in upgrading the resource potential of the project.

About 89,000m of infill and step-out drilling and 18,000m of vertical and lateral development are planned for the Westwood project in 2012.

Mining and processing at the Canadian gold mines

Once on the surface, the ore is transferred onto an ore bin and transported to the processing plant.

The Doyon processing plant at the mine has the capacity to process 3,500t of ore each day. It uses carbon-in-leach (CIL) and carbon-in-pulp (CIP) processes to recover gold.

The plant includes a SAG mill, cyanidation and CIP processing plants and a flotation circuit. It also includes a sludge plant, a water treatment facility, a tailings facility, warehouse, administrative building and other facilities.

Recovered ore from Westwood will be processed at the rate of 700,000t, during the first year.