Expand
Betze-Post open pit gold mine is part of the Goldstrike project located in Nevada, US.
Betze-Post is the eighth deepest open-pit mine in the world.
Komatsu 930E haul trucks are used at the Betze-Post mine. 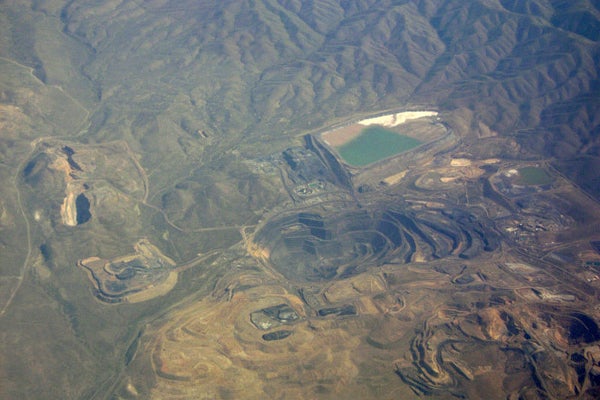 Betze-Post gold mine, in Nevada, US, is the eighth deepest open-pit mine in the world. The mine is 2.2km long and 1.5km wide, with a depth of more than 500m. It is expected to be operational until 2026.

The Goldstrike mine comprises of the Betze-Post open-pit mine and two underground mines, namely Meikle and Rodeo.

Cyanide process is used for heap leaching the ore from all the three mines.

Betze-Post is the largest gold deposit in the Carlin trend, where the Goldstrike deposit is located. The Betze-Post open pit zone is a combination of five generations of pyrite mineralisation.

Diagenetic and coarse grained pyrites are contained in the metamorphic aureole of the Goldstrike. It also consists of micro-veinlets of arsenic and gold bearing pyrite of fourth generation. The arsenian pyrite is further divided into coarsely grained sulphides at 200µm diameter.

Gold mineralisation at Betze-post is controlled by favourable stratigraphy and structural complexity. The ore zone is extended in an area of approximately 1,829m. It has a width of 183m to 244m, while the thickness varies from 122m to 183m.

The disseminated carbonaceous mineralisation occurs as an upper tabular zone of the Popovich Formation, consisting of high grade gold. The breccias mineralisation takes a tabular zone, and is 300ft long with 150ft thickness. It represents partially brecciated and silicified limestone structure.

The seam mineralisation is rich in realgar and orpiment substance, and occurs as dark decalcified fractures and argillaceous zones.

Mining and ore processing at the US gold mine

"The Betze-Post open pit zone is a combination of five generations of pyrite mineralisation."

The ore is processed at the doré located on the site and then transported to outside refineries for gold processing.

The circuit at the autoclave facility was converted from acidic to alkaline in August 2011. Thiosulfate processing technology is being introduced to the mine.

The leach facility conversion is expected to increase the processing capacity. It will use thiosulphate to leach the gold after pressure oxidation, rather than cyanide, and resin to collect the dissolved gold, rather than carbon. The project is expected to begin production by the third quarter of 2014.

Dewatering of the Betze-Post pit is done with the help of perimeter wells located on the pit area.

Infrastructure at Nevada’s Betze-post gold mine

Common infrastructure facilities are used for all the three mines at the Goldstrike project. An 115MW natural gas power plant is installed at the site for meeting the power requirements.