Expand
The Philippines Mines and Geoscience Bureau (MGB) lifted the cease and desist order issued on Siana gold mine in January 2015. Image courtesy of Howard the Duck.
The project is expected to produce approximately 849,000oz of gold and more than 1.4Moz of silver over its lifetime. Image courtesy of Alchemist-hp.
The major mining fleet comprises of CAT D8 dozers along with CAT excavators and CAT 740 40t articulated trucks. Image courtesy of raymondclarkeimage. 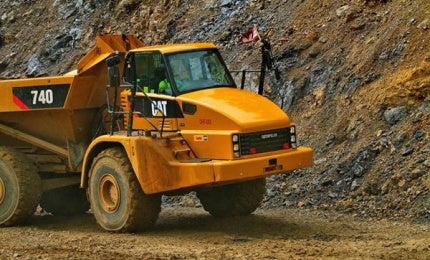 Through its Philippines subsidiary Greenstone Resources, Red 5 is developing the Siana gold mine in the southern Philippine island of Mindinao. The project includes the development of an open pit mine, which will be transitioned to an underground mine.

History of Siana gold mine

The Tampakan copper gold mine is located in the Southern Philippines, about 50km north of General Santos City on the island of Mindanao.

The Philippines Mines and Geoscience Bureau (MGB), under the Department of Environment and Natural Resources (DENR), lifted the cease and desist order (CDO) issued due to the mine’s processing operations in January 2015. The CDO was imposed following the discovery of a subsidence over the distance of the tailings dam wall.

Environmental clearance certificate for the project was granted by the Environmental Management Bureau in October 2014. Mining activities restarted in June 2014 and commercial operations are scheduled to start in the first quarter of 2015.

The project is expected to have a mine life of more than ten years and produce approximately 849,000oz of gold and more than 1.4 million ounces (Moz) of silver during its lifetime.

Cease and desist order on Siana

In April 2014, Red 5 was ordered by DENR to construct a new high-density polyethylene (HDPE) lined tailings facility and install a thickener and cement mixing facility for producing a dry tailings product for the lifting of the cease and desist order (CDO). The letter also included orders to modify the existing tailings storage facilities three and four, in order to accommodate the new thickened cement tailings.

Preliminary earth works on the existing tailings facilities started in June 2014 and stage one civil construction of the HDPE tailings facility was completed in January 2015. Approximately 195,000t of ore has been stockpiled and will be used for final commissioning.

Details, geology and mineralisation of the gold project

Greenstone Resources acquired the Siana gold project in 2003 and completed feasibility study and received the necessary permits by 2009. It began construction at the mine site in 2010 and achieved inaugural gold pour on 6 February 2012.

“Siana gold is estimated to contain probable reserves of 5.57Mt of ore grading at 3.83g/t of gold and 6.8g/t of silver.”

The gold mine is located along the Surigao Valley Fault, a major mineral structure, which is a part of the major Philippine Fault or Rift Zone. The Rift Zone constitutes multiple epithermal gold and porphyry-type copper-gold mineral deposits and features horst and graben strike-slip fault system.

Mineralisation is hosted within altered and brecciated volcanics, volcaniclastics and carbonates of the Central Zone. The central mineralised zone, extending up to 80m-wide, comprises three discrete lodes at depth and seven lodes in the eastern basalts. The gold mineralisation largely occurs within veins and stringers of pyrite and base metal sulphides, as well as carbonate-altered breccias with quartz veinlets.

Mining and processing at the open pit

Conventional load and truck mining, supported by drilling and blasting, is applied at the open pit mine. Initial mining activities will include cutting back the walls of the open pit and mining the ore at the under surface.

Underground mining is expected to begin before the completion of the open pit mining. The ore body will be accessed through an inclined tunnel. Mechanised drill and blast method, using rock cutting machines, is proposed for the underground operations.

“Red 5 was ordered by DENR to construct a new HDPE-lined tailings facility and install a thickener and cement mixing facility.”

The ore will be processed using a conventional gravity and carbon-in-leach pulp (CIP) circuit. It will be crushed in a standard jaw crusher and either stockpiled or transferred directly to a semi-autogenous grinding (SAG) mill which will reduce the particle size to 80% passing 75µ and will subsequently discharge the slurry into the CIP tanks.

The slurry will be mixed with carbon at the CIP circuit, to adsorb gold. The carbon will be stripped from the gold and silver concentrations and formed into a soluble form in a separate circuit. Electrowinning will be applied to recover gold in solid powder form. The product will then be smelted to remove trace metals, producing solid gold and silver bars.

Cyanide detoxification will be conducted on the resultant tailings to remove any remnant cyanide before depositing them in the tailings dam near the processing plant.

AMH Philippines was engaged to provide third-party due diligence assessment and review of the tailings storage facility construction.

Galeo Equipment and Mining was awarded the contract to provide the mining and construction equipment needed for the capital works and the restart of processing.

Outotec, the original fabricator of the thickeners, was also engaged to inspect the construction works and provide commissioning assistance and warranty for the thickeners.

In July 2010, Delta Earthmoving was engaged as the open pit mining contractor for conducting earthmoving works for five years.