Expand
La Coipa gold and silver mine is located in the Atacama district of Chile.
In 2011, Chile's La Coipa mine produced 178,287 ounces of gold.
La Coipa consists of six main deposits.
Conventional open-pit mining methods are being used to mine the ore at La Coipa. 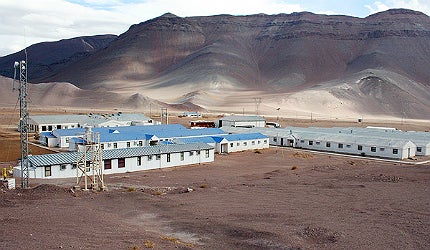 Production is expected to improve in the second half of the year as the processing of ore starts from Can-Can and Ladera-Ferellon deposits. Kinross also plans to explore the silver deposits at the mine. A new discovery at Pompeya is also being explored.

Location within the Maricunga mining district

La Coipa is part of the Maricunga mining district found in northern Chile. It is located at the northern end of the Maricunga belt. The main lithostratigraphic units which host the mineralisation include the Triassic La Ternera formation and the Tertiary volcanic sequence.

Mineralisation at the Chilean gold and silver mine

Conventional open-pit methods are used to mine the ore. The deposits are mined on benches with ten metre intervals. Mining equipment being used includes hydraulic shovels, front-end loaders, drills and 154t trucks.

The recovered ore is processed at a 17,000t/d processing plant which was built in 1991. The plant is located next to the Ladera-Ferellon deposit.

Ore processing starts with a pre-crushing circuit including a semi-autogenous ball mill. This is followed by primary crushing in two ball mills where the ore size is further reduced. Crushed ore is ground into a fine powder in the grinding circuit.

After grinding, the slurry is thickened and leached with cyanide in eight carbon-in-leach (CIL) tanks. The leached solution is filtered, washed and sent to the Merrill-Crowe metal recovery circuit. The Merrill-Crowe process recovers the precious metals, which are then sent to the doré refinery to produce the final product.

Tailings from the processing circuit are filtered and sent to the tailings storage facility.

In April 2010, Kinross installed a dust control solution at the mine. The solution helped in conserving nearly 12 million gallons of water annually in the highly water scarce Maricunga district.

"It is 100% owned and operated by the Kinross Gold Corporation through its subsidiary Minera Mantos de Oro."

Developed by General Electric (GE), the solution was implemented to control the large amount of dust released when material was moved from the mining area to the crushing area.

GE’s solution includes grading and conditioning of the roads. This is followed by the application of a mix of water and DusTreat DC9112. The process reduces the waste of water required to clean the roads.

After the product dries, it renders the road dust free and non-slippery for a long-period of time. If new dust is created, only light watering is required to activate the product.