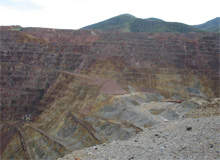 Pinto Valley is an open cut gold and copper mine located about 125km east of Phoenix in the US state of Arizona.

Wholly owned by BHP Billiton, Pinto Valley was acquired through the acquisition of Magma Copper Company in 1996.

“Pinto Valley was acquired through the acquisition of Magma Copper Company in 1996.”

Sulphide mining operations stopped in 1998, after which the operation continued to produce small amounts of copper cathode through residual dump leaching SXEW operations.

Following a Feasibility Study on a re-start of the sulphide mining operations in 2006, the Re-Start Project was approved in January 2007 with first concentrate production occurring in October 2007.

The Miami unit of Pinto Valley Operations is an in situ leach plus SX-EW operation within the upper parts of an oxidised and enriched porphyry copper deposit. The Miami unit is currently on care and maintenance status, except that the SX-EW unit is processing leach solutions that continue to be cycled through the leachable resources.

BHP estimates that current reserves at Pinto Valley will support mining for a further four years.

The Pinto Valley mine produces concentrate and cathode from a low-grade porphyry copper characterised by chalcopyrite mineralisation within potassically-altered quartz monzonite.

“BHP estimates that current reserves at Pinto Valley will support mining for a further four years.”

The changes in Ore Reserves are due to lowering the mill feed cut-off from 0.27% Cu in 2007 to 0.25% Cu, changed haulage ramp design and other mine parameters, and a revised resource model, including revised classification. Mine life only considers the extraction of the intact sulphide ore. Copper recovery of the low-grade sulphide stockpiles is estimated from the expected leach production during mine life.

Changes to the resource declaration include revised methods of resource modelling and classification, and updated economic and geotechnical parameters.

The Pinto Valley mine is accessible by public road. Cathode production is trucked to domestic customers in the United States and Concentrate production is trucked to San Manuel, Arizona where it is loaded on rail and transported to the Port of Guaymas in Mexico. BHP owns and operates 100% of Pinto Valley and hold title to the land. Mining operations are contracted to The Washington Group, a subsidiary of URS.

Approval to re-open the Pinto Valley unit was given in December 2006 upon completion of a feasibility study of a mine and mill re-start. Mining activities were re-initiated in mid-June 2007, while milling started on schedule in October 2007.

“Approval to re-open the Pinto Valley unit was given in December 2006 upon completion of a feasibility study.”