Variable workforce during construction, approximately 500 when in operation 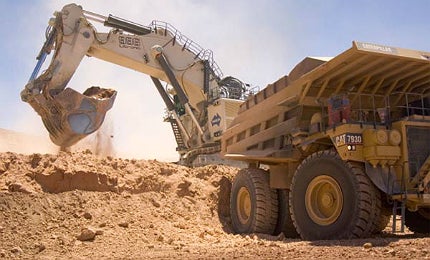 It was discovered in 2001 by Adelaide-based Minotaur Exploration Limited and is considered the most significant Greenfield discovery in Australia for a decade.

Oxiana was renamed as OZ Minerals following its merger with Zinifex in 2008, and is listed on the Australian Stock Exchange. The estimated capital cost of the project is A$1.15bn.

Board approval for the mine was granted in 2006. The company started production in February 2009. It was estimated that it would produce between 85,000t to 100,000t of contained copper and between 60,000oz to 70,000oz of gold, but it has exceeded expectations.

Transporting concentrate to the Port of Darwin

The mine delivers concentrate via the Adelaide to Darwin railway to the Port of Darwin. Prominent Hill delivers around 600t of concentrate per day, six days per week, to the port.

“Good potential also exists to discover satellite deposits to Prominent Hill and other deposits in the wider tenement package.”

Exploration testing beneath the Prominent Hill resource returned positive results, demonstrating that the copper-gold system extends at least twice as far as was initially outlined.

Following this, OZ Minerals started a two-stage expansion and life extension study. Stage one investigated a potential 1-2mtpa underground mine, with higher grade copper and gold ore to supplement the 8mtpa open pit. The second stage investigated a deeper bulk underground mine development which would see the mine life extended out to at least 2030.

The ore reserves of Prominent Hill as of 2012 stood at 69.8Mt grading at 1.1% Cu and 0.6g/t Au. It includes 32.6Mt of proven and 37.2Mt of probable reserves. OZ Minerals is exploring the Prominent Hill deposits further to discover new gold-copper deposits.

From the extension studies, OZ Minerals’ board approved the Prominent Hill Ankata underground mine project in 2010. Development started in November that year and first ore was produced in 2012. The Ankata underground mine is expected to produce 25,000t of copper and 12,000oz of gold per year. It is being mined using sub-level open stoping.

Prominent Hill’s Malu open-pit mine has a conventional grinding and flotation processing plant with an 8mtpa of capacity. A permanent village accommodates a steady-state workforce of approximately 500 and a haulage road, power line and bore field have been constructed. The dimensions of the initial open-pit mine were 480m deep × 1.4km × 1.2km.

Ore processing at the Australian mine project

Ore processing at Prominent Hill uses conventional crushing, grinding and flotation with 8mt/a throughput with an average stripping ratio of 7.2. The average head-grade is 1.24% copper with grades higher for the first four years. Average recovery is 86% for copper and 77% for gold.

The future for the Prominent Hill mine

Prominent Hill is expected to run for an initial ten years, with the underground Ankata mine running for at least seven years. A larger zone below this is also expected to be mined using bulk caving methods. Good potential also exists to discover satellite deposits to Prominent Hill and other deposits in the wider tenement package.

Frieda River Project is located in the provinces of Sandaun and East Sepik in Papua New Guinea.

Northparkes Copper and Gold Mine, Australia

Northparkes Mines is a copper-gold mine near the remote Australian town of Goonumbla, about 27km north-north-west of Parkes, a regional centre in central-west New South Wales.

Mintap
Mintap is the official distributor of the C-Gap closed side...