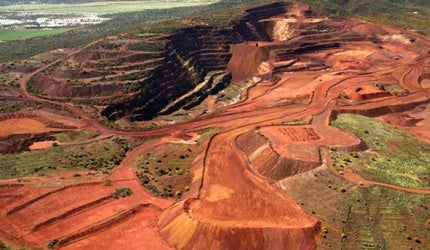 Koolanooka iron ore mine is located 60km south-east of Geraldton and 20km east of Morawa in Western Australia. The Koolanooka deposit was first discovered in 1961 and mining at the site was carried out between 1964 and 1974 by Western Mining through a Geraldton Operations Joint Venture (GOJV).

The mine was reopened by Sinosteel Midwestern (SMC) in April 2010 as part of its Koolanooka and Blue Hills (Mungada) Direct Shipping Iron Ore (DSO) Project.

"The resource estimate for the magnetite mineralisation at Koolanooka stands at 430mt grading at 35% Fe."

The Koolanooka and Blue Hills DSO Project advanced after Sinosteel Corporation of China acquired Midwest Corporation in 2008. The project commenced operations in April 2010 with the aim to produce more than seven million tonnes (mt) of hematite DSO iron ore over a period of five years.

The first stage of the Blue Hills Direct Shipping Iron Ore (DSO) project focussed on mining at two extended pits (south-fold cutback and Detritals pit) of the previously existing Koolanooka mine with a production target of 4.33mt. The ore from the Koolanooka and Blue Hills DSO Project was first shipped in July 2010.

Koolanooka mine is scheduled to be closed in mid-2013, after which SMC will concentrate on the BlueHills deposit, which contains an estimated ore reserve of 4.3mt. BlueHills consists of two iron ore tenements – Mungada East, and Mungada West in the Perenjori Shire in the Mid West region of Western Australia. An annual production of 1.4mt over three years is planned for BlueHills.

The Koolanooka deposit lies in the Yilgarn block, a sedimentary rock mass formed approximately 2,700 million years ago that underlies an area of 65,000km² in the southern part of Western Australia.

The ore deposit at the 13km-long Koolanooka hills is composed of a banded iron formation (BIF) containing different rock layers such as hematite-goethite-magnetite, hematite-chert, hematite-clay, hematite-magnetite-limonite, limonite-hematite and hematite-limonite-chert. The ore originally mined at Koolanooka averaged at a grade of 60.2% Fe.

Boddington Gold Mine (BGM) is located about 130km south-east of Perth in Western Australia. The largest gold mine in the country, it is poised to become the highest producing mine once production ramps up over the next few years.

The direct shipping hematite ore at Koolanooka, which is being produced by the current project, is believed to have been formed through the weathering of the BIF. Aeromagnetic survey conducted at the mine site has also indicated the strong presence of magnetite content in the BIF.

The JORC-compliant reserve estimate prepared at the end of 2007 stood at 7.9mt of direct shipping hematite ore grading at 57.8% Fe. The resource estimate for the magnetite mineralisation at Koolanooka stands at 430mt grading at 35% Fe.

Mining, processing and transportation of ore

Open-pit mining is carried out at Koolanooka and BlueHills with drill and blast. Ore is removed from the pit through load and haul. It is then crushed and screened at the mine site. MACA Mining is the contractor for mining, crushing and screening at Koolanooka.

The hematite ore is transported to the port of Geraldton for shipping. Storage and loading facilities are available near the port. The designed capacity of Koolanooka operation is 1.5mt of direct shipping ore a year.

"The mine was reopened by Sinosteel Midwestern in April 2010 as part of its Koolanooka and Blue Hills Direct Shipping Iron Ore Project."

The proposed project is, however, in prefeasibility stage currently. A fresh environmental approval is needed for the implementation of the project.