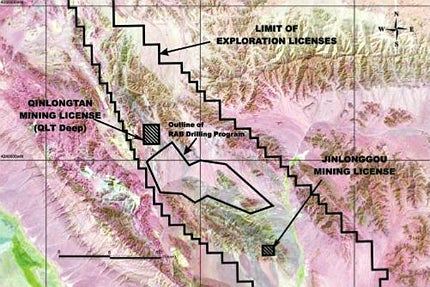 Tanjianshan gold mine is located in the Dachaidan region of Qinghai, China. It is 90% owned by Qinghai Dachaidan Mining, a subsidiary of the Eldorado Gold Corporation, and the rest by Qinghai Number One Geological Brigade (five percent) and Dachaidan Gold Mine (five percent).

Tanjianshan mine comprises of two deposits, namely Qinlongtan and Jinlonggou. The mine is located in Saishiteng Mountains, which have an elevation of 3,300m to 3,500m.

The Tanjianshan mine is spread in an area of 338km². Eldorado owns four exploration and mining licences for Qinlongtan and Jinlonggou.

Geology and development of Tanjianshan gold mine

"Tanjianshan gold mine is located in the Dachaidan region of Qinghai, China. It is 90% owned by Qinghai Dachaidan Mining."

Surface mineralisation at the Jinlonggou deposit consists of shear zones within carbonaceous phyllites. Sub-horizontal diorite porphyry sills are found at the bottom of these deposits. Pyrite filled fine grained free gold is present in the Qinlongtan deposit.

Feasibility study for Tanjianshan gold mine was completed in 2005. Whittle Four-X pit optimisation software package was used for the development of Qinlongtan and Jinlonggou deposits, for pit optimisation.

Whittle Four-X pit optimisation is a utility programme that checks the tonnages and grades within the models. It is known for achieving low stripping ratio and also used to generate structure arcs that control the optimisation slopes.

Waste dumps are installed in order to utilise the waste during the pre-production period to build the Run of Mine pad and other infrastructures at the mine.

Drilling and blast mining methods are used to recover ore from the open pit gold mine at Tanjianshan. Back hoe excavators are used for excavating the ore and haul tracks with a payload capacity of 10t and 50t are being used.

Gold processing at the Chinese mine

A heap leaching method is used to process the run-of-mine ore. The ore from the Qinlongtan deposit is processed through a Run of Mine bin and passes through a single stage crushing circuit in order to form a stockpile. The stockpile passes through a conventional carbon in leach circuit before the tailing is floated. Sulphide material is removed during this process.

"Drilling and blast mining methods are used to recover ore from the open pit gold mine at Tanjianshan."

The floated materials from Qinlongtan and Jinlonggou will be blended to obtain optimum sulphur equivalent amount. The blended material is fed to a two stage roasting circuit.

Roasted agglomerates are removed from the roasting circuit and the solid product is leached in a carousel carbon in leach (CIL) circuit. The roaster off-gas is precipitated to remove arsenic and other gases such as SO2.

Carbon is removed from the absorption circuits and the zadra method is applied for separating gold. Zadra method involves gold extraction from the cyanide solution, while economically regenerating the process carbon. A single stage semi autogenous grinding (SAG) mill is being used for grinding the ore.

The first pouring of gold at Tanjianshan was done in December 2006. Commercial production started in 2007. The sulphide ore processing facility started operating from 2009. The mine produced 110,611 ounces of gold in 2012.

Agnew Gold Mine is located 1,000km northeast of Perth in Western Australia.

Tindals gold mine is located 35km west of Kalgoorlie near the town of Coolgardie in Western Australia.