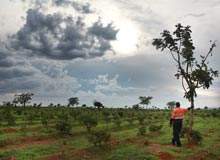 Bulyanhulu Gold Mine is situated 55km south of Lake Victoria in the district of Kahama, in the Shinyanga Region of the United Republic of Tanzania. It is owned and operated by African Barrick Gold (ABG), a wholly owned subsidiary of Barrick Gold Corporation. Approximately 2,853 personnel were employed at the mine’s site by December 2011.

The mine was purchased by ABG in June 1999. The first gold was poured in April 2001. Operations at the mine are expected to be shut-down by 2034. The electricity to the mine is supplied by the Tanzania Electric Supply Company Limited (TANESCO), via a 220kv overhead grid network which connects to the Shinyanga station.

Operations at the mine were temporarily suspended in March 2010, because of a rock fall incident which caused three mortalities.

Gold production rates at the Tanzanian mine, East Africa

The production at the Bulyanhulu mine in 2011 stood at 262,034oz, which was one percent higher when compared to 2010 production rates.

The Bulyanhulu mine lies in the shear hosted quartz-veined deposit, which comprises of Archaean rock formations. It hosts mafic volcanic flows overlaid by a series of pyroclastics and ash tuffs. Argillite is hosted between the mafic and felsic rocks present at the mine.

The mine consists of five different deposits, namely the Main, East and West zones and Reefs 0 and 2.

Gold mineralisation occurs in the reefs or quartz veins which are steeply plunging towards north-west striking structures. The mineralisation extends to a strike length of five kilometres and two to three metres in width. The majority of the mineralisation is identified in Reef 1.

The gold is associated with distributed sulphides ore within the steeply dipping reefs. The mine hosts high grade gold and low grade copper and silver.

Bulyanhulu has been developed as an underground trackless mining operation. It is being mined using four mining methods, which include longhole sublevel stoping, conventional cut and fill stoping, mechanised drift and fill stoping and alimak stoping.

Processing of concentrates at the deposit south of Lake Victoria, in Kahama

The run of mine ore is crushed and grinded in a crushing and grinding mill. The output of the mill is conveyed to the floatation and carbon-in-leach (CIL) circuit, which constitutes cyanide leach tanks to generate pregnant solution.

The Bulyanhulu mine is accessible via a private airport and local unpaved roads which connect to the main highway near Kahama.

EUROGOMMA
EUROGOMMA is a manufacturer of polyurethane screens, including modular polyurethane...