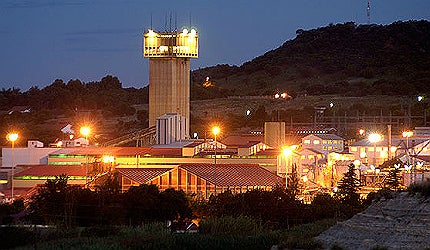 AngloGold Ashanti’s Savuka gold mine is situated in Gauteng, South Africa. The underground mine is the second deepest mine in the world, at a depth of nearly four kilometres. It produced 49,000oz of gold in 2011 at a cost of $864/oz.

The mine is approaching the end of its productive life with majority of the ore having been exhausted. Minimal mining operations are being carried out at the mine currently.

The mining operations at Savuka are occasionally affected by seismic activities. This has resulted in damage to the shaft and infrastructure, as well as worker fatalities over the years.

The latest earthquake that occurred in January 2012 resulted in the death of an employee. Inspections were carried out and operations halted temporarily following the incident.

“The mining operations at Savuka are occasionally affected by seismic activities. This has resulted in damage to the shaft and infrastructure.”

West Wits operations consist of the Ventersdorp Contact Reef (VCR) and the Carbon Leader Reef (CLR). Savuka and TauTona both mine the CLR while the VCR is mined by Mponeng.

CLR constitutes a major part of the Savuka mine. It is 20cm thick and includes three main stratigraphic units. Unit one is the most economically important of the three units and is spread over the mine in the form of a sheet. Unit two is a channel deposit which is currently being mined. Unit three is the oldest of the three units.

The VCR portion in the Savuka mine is a well-developed deposit and contains higher gold accumulations.

Mineralisation at Gauteng’s Savuka gold mine

Gold mineralisation occurs in two metre thick quartz pebble conglomerates. Gold is accumulated with pyrite and carbon, along with quartz as the gangue material.

Gold processing at the world’s second deepest mine

At the Savuka mine, the CLR is mined at depths ranging from 2,600m to 3,500m below the surface, while the VCR is mined at a depth of 1,808m below surface. VCR has been mostly mined out with mining operations ceasing in 2010.

“Ore recovered from the mine is processed by the Savuka gold processing plant, which also processes ore from the TauTona mine.”

The mine is equipped with various facilities to ensure that the working temperature is bearable for the workers.

In 2009, a seismic event destroyed the shaft and infrastructure at the mine. The aftershocks from the seismic event caused the underground dams to burst. As a result, the mine was flooded and the equipment was damaged. The primary and tertiary shafts were not damaged, but the main supporting structures for the CLR production were.

From the second level, the mine was fully flooded with pumping and ventilation services also affected. A $30m renovation programme was undertaken to restore the operations at the mine.

Ore recovered from the mine is processed by the Savuka gold processing plant, which also processes ore from the TauTona mine.

The processing plant includes a conventional mill circuit which crushes the ore into a suitable size. The crushed ore is fed into the Carbon-In-Pulp circuit.

The processed ore is sent to the Mponeng gold processing plant, where final elution is carried out using electrowinning and smelting. The recovered gold is then moulded into gold bars.