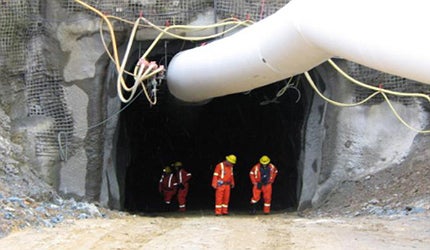 Halfmile Mine is an underground polymetallic mine located in northern New Brunswick, Canada. The property is situated about 12km from the Brunswick 12 deposit and about 60km southwest of Bathurst. The mine covers an area of 1,104ha and has 73 claims. It contains lead, zinc, gold, silver and copper.

Trevali Mining (Trevali) acquired 100%-ownership of the Halfmile and Stratmat properties from Xstrata Canada through its subsidiary Kria Resources, in 2008. Under the agreement finalised in October 2011, minerals from the Halfmile mine are shipped to Xstrata’s Brunswick-12 Mill in New Brunswick for treatment. Xstrata will offtake 100% of the metal concentrates produced after toll milling. The company will also receive 2% of the Net Smelter Return (NSR) as royalty.

Development of the Halfmile Mine

"Exploration of the Halfmile mining site was started by the previous property owners in the 1960s."

Kria received environmental and occupation permits to start construction at the mining site in January 2011. New Brunswick’s Department of Natural Resources and Energy awarded mining lease of the Halfmile mine to Trevali for an initial 20-year period in December 2011. It is further extendable for up to 80 years.

The scope of work for the processing plant includes stockpiling the mined material, treating, processing and producing the minerals and bulk concentrates. Xstrata’s Brunswick 12 tailings management facility will handle the residues.

Exploration of the Halfmile mining site was started by the previous property owners in the 1960s. Extensive explorations were made in the 1980s and 1990s. Kria conducted diamond drill campaigns to explore the metallurgical testing at the Halfmile.

"The Halfmile Mine is one of 45 volcanic sediment-hosted sulphide deposits in the Bathurst Mining Camp district."

The strike of the Upper and Lower zones has intersected mineral deposits during the diamond drilling and is being further explored. The Deep Zone contains sulphide horizon along strike and down dip.

Two narrow diamond drill holes drilled in the North Zone indicate high potential and will be investigated in the future. In May 2012 Trevali announced that the recent underground definition drilling indicates 25% wider sulphide deposit than the initial estimated model.

Mine production and metallugical results

The mineralisation concentration is expected to require lesser reagent than the ones mined at the Bathurst Mining Camp. It also exhibits superior flotation characteristics. The access ramp of the underground mine is currently being deepened to reach the lower levels of the deposits for extraction. The project has a nameplate production capacity of 2,000t/day.