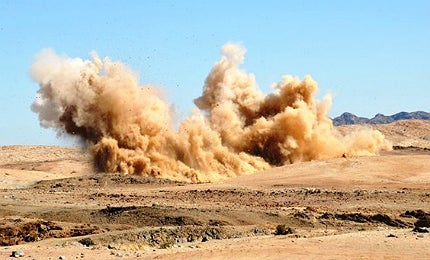 “Discovered in February 2008, the mine is currently the third largest uranium-only deposit in the world.”

Discovered in February 2008, the mine is currently the third largest uranium-only deposit in the world. It is located in the Namib Desert.

The project received environmental clearance from the Namibian Ministry of Environment and Tourism in January 2011. By the end of 2011, it had obtained a mining license from the Ministry of Mines and Energy. Production is expected to begin in 2015.

The mine is expected to create about 4,000 construction jobs and 1,200 permanent jobs. At the current price of uranium, it will contribute five percent of the country’s gross domestic product (GDP).

The Husab uranium deposit contains a high grade of uranium hosted in a type of granites called alaskites in the Erongo region. It is located 45km from Walvis Bay, which is the main port of the country. The region contains many similar uranium mines. Husab, is however, the largest and highest grade uranium-only deposit in Namibia.

The mineralisation is present for a lenght of approximately eight kilometres at the property. It occurs within the granites, as well as in the form of secondary uranium vanadate.

Exploration zones of the Husab project

The Husab Project is divided into five zones for the purposes of exploration. The definitive feasibility study on zones 1 and 2 commenced in April 2009 and were completed in the first quarter of 2011.

Initial estimates indicate at least 280mt of uranium reserves and a mine life of 20 years.

The project is expected to produce 7,000t of uranium each year when fully operational. It will be the second largest uranium producer in the world, while the MacArthur River mine in Canada is the first largest. The average strip ratio assumed for the production estimates was 7:1.

Husab will be developed as an open-pit mining operation that uses a conventional truck and shovel method. It will avail loading and hauling equipment on a huge scale for the mining.

“The Husab deposit contains a high grade of uranium hosted in a type of granites called alaskites in the Erongo region.”

Drill rigs will be used to create the pits for mining. Excavation will be carried out using diesel and electric shovels, and carried away for dumping by haul trucks.

Other miscellaneous equipment will include excavators, rock breakers, dozers and so on.

A mine residue facility will be built at the site to dump the waste rock and tailings.

A programme to optimise and extend the mining resources has also been planned in order to increase the mine’s life and improve the processes.

Processing at Namibia’s uranium mine

The ore extracted from the mine will be fed to the processing plant to produce high grade uranium. A conventional acid leach plant will be used to process the ore. It will be designed for a capacity of 15mlbs per annum.

“The project is expected to produce 7,000t of uranium each year when fully operational.”

The process is estimated to recover approximately 88% of the uranium.

The precipitate will be washed, thickened and dried before packing and finally shipping to the customers.

The development cost of the mine is expected to be $1.48bn, including $210m for infrastructure and $529m for the processing plant. The cost of production is estimated at $28.5 per pound of U3O8.

Etango uranium project is located in the Erongo uranium province in Namibia. It is one of the largest undeveloped uranium mines in the world.

The Rossing Uranium mine is located 70km north-east of Swakopmund in Namibia, Africa.

Trekkopje uranium mine is located in western Namibia in southern Africa, approximately 65km north-east of Swakopmund.