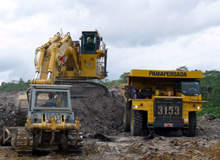 The Jembayan thermal coal operation covers an area of over 12,000ha in East Kalimantan, Indonesia, some 150km north-west of Balikpapan and 80km from the sea.

Straits Resources subsidiary Straits Asia Resources (SAR) completed its acquisition of the mine in 2007 in a deal worth $350m, which was made up of $275m in cash and the issue of 75 million SAR shares to the vendors, representing 6.9% of Straits Asia’s enlarged issued share capital.

The mine has been operating since 2004 with substantial year-on year ramp up. For the financial year ending December 2007, Jembayan produced 3.96Mt in 2007.

Jembayan produces two brands of coal: Prangat, which is bituminous and rated 6,000CV ADB; and Jembayan, which is sub-bituminous and rated 5,500CV ADB. Straits Resources says that the purchase of this multi-pit operation has added significant value and prospects to Straits Asia’s investments in coal. Less than half the concession area has been explored and Straits Asia intends to complete a major drilling programme during 2008.

The acquisition of Jembayan is expected to double SAR’s coal production. Commenting on the move, Richard Ong, CEO of SAR said: "This is a fantastic opportunity for Straits Asia to expand its thermal coal mining business in Indonesia. Jembayan is an outstanding coal mine with excellent infrastructure. I am delighted with this transaction and that the vendors will hold a stake in the future of the combined businesses."

Formerly a copper-only producer, Straits Resources has divested a number of its copper assets over the last few years and has been investing primarily in revamped gold projects.

The Jembayan concession covers a total area of nearly 13,000ha. In November 2007, SAR upgraded its available resources at the Jembayan mine to 254Mt (from 138Mt) as continued exploration efforts bore fruit. This is the second upgrade of Jembayan’s resource since SAR acquired the mine in December 2007, and its management is optimistic that further drilling efforts will lead to more resource upgrades.

In addition, SAR’s exploration target for in-situ coal at Jembayan has been raised to 600Mt – 700Mt, substantially higher than the 200Mt it had originally targeted. The resources upgrade puts SAR in a position to raise its output in the long run. However, analysts said that they did not expect any impact on the group’s near-term earnings due to ongoing capacity constraints.

“The Jembayan thermal coal operation covers an area of over 12,000ha in East Kalimantan.”

Mining operations at Jembayan are undertaken using contractor PAMA. The mining method used is surface, open pit mining using truck and excavator / shovels. The mine maintains a full management team charged with the responsibility for planning and daily interface with the contractors.

The mine has its own barging port, reached via a 26km road, from where loads are barged approximately 70nm down the Mahakam River to ships waiting offshore.

The two brands of Prangat and Jembayan are characterised by low ash and sulphur levels. The mine has been operating since 2004 with substantial year-on year ramp up. For the financial year ending December 2007, Jembayan produced 3.96Mt in 2007.

Scania
Scania tailor-makes the right mining solutions just for you. Whether...
SUBSCRIBED