Estimated Cost of the Expansion 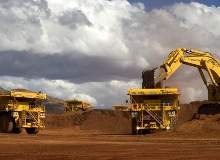 Located in the Hamersley Range mountainous region in East Pilbara roughly 110km north-west of Newman, West Angelas mine has been operating since 2002.

The mine is currently undergoing expansion to increase production capacity from the existing 29 million tonnes (Mt) to 35Mt a year. The $642m expansion is scheduled to commence production in 2015 and extend the mine life by approximately 13 years.

West Angelas mine geology and reserves

The West Angelas Mine extracts ore from the Marra Mamba banded iron formation (BIF). The Marra Mamba ores contain 62% Fe and are brown in colour due of goethite content.

The mining license consists of two deposits, namely A and B. The current mining operation is confined to deposit A, and mining of deposit B will be carried out as part of the expansion project.

As of 31 December 2012, it is estimated that the mine contained 161Mt of proven and 67Mt of probable iron ore reserves.

Mining and processing at West Angelas mine

West Angelas is the first mine to be deployed with transforming technologies, such as autonomous haulage, autonomous drilling and remote controlling of mining operations, as part of Rio Tinto’s ‘Mine of the Future’ programme.

The extracted ore undergoes crushing and screening on the site and then sent via rail to the Cape Lambert port for shipping.
The entire loading and hauling processes at the mine are monitored and remote-controlled in real time from Rio Tinto’s operations centre in Perth, which is located more than 1,000km away from the mine site.

The Pilbara-based mine produced 29.57Mt of iron ore in 2013. The expansion project is expected to increase its annual production capacity by 6Mt.

Details of the West Angelas iron ore mine expansion

Rio Tinto secured approval for the West Angelas expansion project in March. The project involves the development of a new pit for extracting West Angelas Deposit B. Additional heavy mining equipment will be deployed and the existing process plant at the site will be expanded to support the expansion project. A new ore stacker is also being developed apart from the extension to existing non-process infrastructure.

“West Angelas is the first mine to be deployed with transforming technologies as part of Rio Tinto’s ‘Mine of the Future’ programme.”

The site utilities and services will be enhanced as well. The access road of the mine that connects with the Great Northern Highway is also being upgraded as part of the project.

Calibre Group was awarded the engineering, procurement and construction management (EPCM) contact worth $22m for the West Angelas expansion project in February.

Decmil Australia was awarded a $35m contract by Rio Tinto in May 2014 for various non-process infrastructural services as part of the project.

Forge Group Power was awarded an engineering, procurement and construction contract for an 80MW open-cycle power station near the West Angelas mine site in 2012.