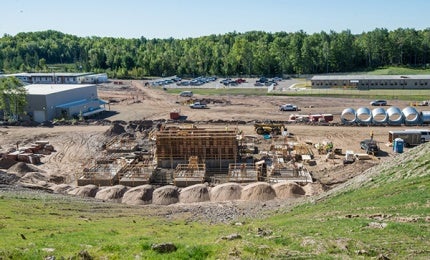 Eagle mine is located in Marquette County in the Upper Peninsula of Michigan, US. The deposit, owned by Lundin Mining, is classified as a high-grade magmatic sulphide deposit comprising nickel and copper mineralisation.

Commercial production at the Eagle mine started in November 2014. The project created approximately 500 contractual jobs during construction and more than 300 operational jobs.

Situated in the Nunavik territory of Northern Quebec, Canada, the Raglan nickel-copper mine is part of Falconbridge’s Integrated Nickel Operations (INO).

Rio Tinto discovered the Eagle nickel-copper mine in 2002 and conducted the feasibility study in 2007. Lundin Mining acquired the mine from Rio Tinto in 2013 for a cash consideration of approximately $315m. In addition to the underground mine, Lundin also gained control of the historic Humboldt mill site and the mineral, water, access and surface rights around the mine.

The mine is located at the east side of the Baraga Basin, which is a section of Paleoproterozoic sediment in Michigan. Along with copper and nickel, the mine also contains a smaller amount of cobalt, precious and platinum group metals; pentlandite and chalcopyrite are the economically feasible minerals found at the deposit.

As of 31 December 2014, the Eagle mine was estimated to contain proven and probable nickel and copper reserves of 5,164 million tonnes (Mt) grading 3.1% nickel and 2.6% copper.

Mining and processing of ore at the nickel-copper mine

"Eagle mine contains proven and probable nickel and copper reserves of 5,164Mt."

Ore is delivered to the surface and stored in a covered coarse ore stockpile facility; from there it is trucked and transported 105km away to the Humboldt mill, for processing.

The processing plant has a capacity to process at a rate of 2,000t/d and employs conventional crushing, grinding and flotation methods to produce separate nickel and copper concentrates. The concentrates are stored in a building at the plant site and later transported to a number of smelter facilities in North America through existing rail infrastructure or taken to Québec, Montreal or Vancouver ports for shipping to overseas smelters.

Infrastructure facilities at Eagle mine

Paved roads from the Big Bay, L’Anse, and Marquette cities provide access to Eagle mine, while the Humbolt mill is located near the main US Route 41. Power required for the mining operations is provided from the onsite power station.

Financing of the nickel-copper deposit

The Eagle nickel-copper mine is funded through a $250m term loan provided by a syndicate of lenders.

"Commercial production at the Eagle nickel-copper mine started in November 2014."

The project is also funded by a $350m revolving credit facility.