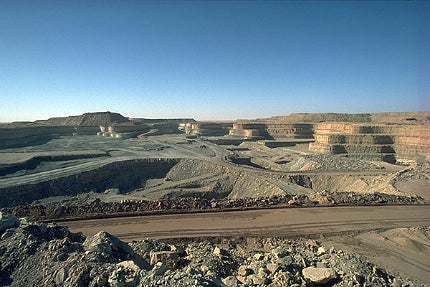 French nuclear energy company Areva is the developer of the mine. The mine is co-owned by AREVA, Sopamin and by KEPCO (South Korea).

Imouraren uranium mine geology and development

"French nuclear energy company Areva is the developer of the mine."

Imouraren mine is located in the Tchirezrine sandstone which is of the Jurassic-Cretaceous period. The deposit forms part of the Guezouman conglomeratic formation. Palaeozoic volcanic rocks are widely found in this region.

The region contains Sandstone-type uranium deposits. The deposit is extended over eight kilometres long and 2.5km wide, and is located at an average depth of 130m.

Uranium deposits in the Imouraren region were discovered in 1966 but the mine was not developed due to the unfavourable uranium market. Areva obtained an exploration permit for the mine in 2006 and conducted prefeasibility and environmental impact studies in 2007.

Mining permission was obtained in 2009 and the operational launch was carried out in 2010. The mining installations are expected to be completed by 2013.

Edf Group will purchase 20,000t of uranium from the mine, as part of an agreement signed with Areva. The mine is expected to witness the extraction of four billion tonnes of waste rocks and ore during its life span.

Uranium mining and processing at Imouraren

The Imouraren uranium mine development project was launched in 2010. Rock layers above the uranium deposits have been removed. Dewatering pumping systems have been installed in order to reduce the chances of water flowing into the mine during the mining process.

"Imouraren mine is estimated to contain reserves of 179,000t of uranium."

Under the heap leaching method, the ore from the mine will be crushed and transferred to leach pad using mobile conveyors and radial stackers.

Sulphuric acid is added to the ore and a substance containing uranium will be separated from the ore. Yellow cake of uranium is then produced by processing the substance.

Construction at Niger’s Imouraren mine

A drainage layer has been formed through the ore heap in order to provide for the acid circulation of solution. This helps in the recovery of uranium bearing solution.

Eco-design approach is followed to find ways to conserve water and reduce much water consumption. The length of the ore conveyor length has been optimised so as to reduce the energy consumption.

A cogeneration system has been installed at the sulphuric acid plant in the Imouraren mine. The steam generated will be used partly in the chemical plants and partly to produce electricity.

Toro Energy’s Wiluna uranium project lies 30km away from the town of Wiluna in Western Australia. The mine covers an area of 1,500ha.

Langer Heinrich Uranium Mine is an open-pit mine in the Namibia Desert, about 80km east of Walvis Bay, Namibia.