Expand
Dvoinoye underground gold mine is located in the Chukotka region of Russia. Image courtesy of Kinross.
The mill at Kupol mine will be used to process the Dvoinoye ore.
Dvoinoye mine is expected to produce up to 300,000 ounces of gold per annum. 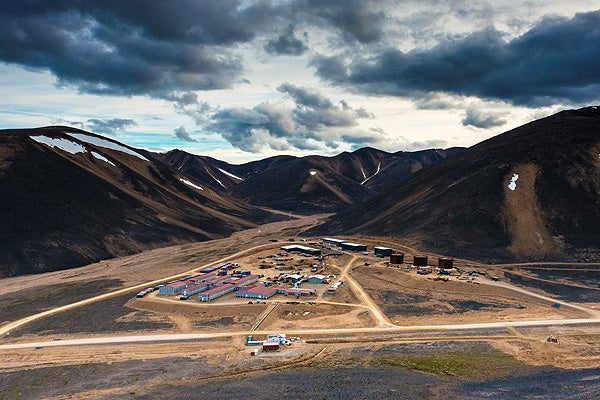 Dvoinoye is an underground gold / silver mine located in the Chukotka region of Russia’s Far East. It is a low cost and high-grade gold mine owned and operated by Kinross, a Canadian gold mining company.

The Dvoinoye gold mine began commercial operations in September 2013. The mine is expected to produce up to 300,000 ounces (Oz) of gold annually during the initial three years of full production.

The mining life of Dvoinoye is estimated to be seven years.

The mine is located within 100km distance of Kupol gold and silver mine and the ore processing will be done at the Kupol mine’s processing mill.

Kinross acquired the Dvoinoye deposit in 2010 and started developing the underground mine.

The mine development is expected involve a capital expenditure of approximately $370m.

Dvoinoye mine geology and reserves

The Dvoinoye gold and silver deposit forms part of the Cretaceous Okhotsk-Chukotka volcanogenic belt. It is a high grade epithermal gold deposit.

History and exploration of the gold mine

“The mine development is expected involve a capital expenditure of approximately $370m.”

Kinross acquired the Dvoinoye exploration and mining licenses from Northern Gold in 2010. Dvoinoye was earlier being operated as an open-pit mine.

The deposit was being mined for six months per year before being acquired by Kinross. The open-pit mine had a daily throughput of 250t per day.

Underground exploration drilling started in 2011 and approximately 6,000m of drilling was completed in 2013. Three core rigs were employed for the drilling.

Mining and ore processing at Dvoinoye gold mine

The Russian gold mine uses underground mechanised mining for ore extraction. The mine is expected to produce up to 1,000t of ore per day.

“The mine is expected to produce up to 300,000 ounces (Oz) of gold annually during the initial three years of full production.”

The extracted ore is transported by road to the Kupol mill. The entire ore output is purchased by CMGC, a wholly owned subsidiary of Kinross.

The run-of-mine ore is crushed in a jaw crusher and transported to a crushed ore storage bin.

The grinding circuit is equipped with a Knelson concentrator for gravity separation of free gold and silver.

The processing mill at Kupol mine is a conventional gold / silver cyanidation plant with a processing capacity of 3,000t per day. It is equipped with a counter current decanation (CCD) thickener washing circuit and Merrill-Crowe zinc precipitation unit.

Infrastructure facilities at the Russian mine

Construction of the underground decline at Dvoinoye started in 2011. The decline exceeded 1,567m depth by 2013.

Major construction works also included the installation of permanent main ventilation fans away from the construction of surface infrastructure and facilities, such as a permanent camp and administrative building.

Two 110kV overhead power lines, Komsomolskoye-Mayskoye and Valunistoye-Egvekinotskaya SDPS, were constructed for supplying power to the mine.

An all-season road between Dvoinoye and Kupol was constructed to transport ore to the Kupol mill.

Kibali gold mine is situated 560km north-east of Kisangani in the Orientale province.

The Olimpiada mine of Russia is the fourth biggest gold mine in the world.