Probable reserves of 3.0 million tonnes grading at 0.31% tungsten and 0.12% molybdenum

Expand
Molyhil tungsten and molybdenum mine is located 200km away from Alice Springs in the Northern Territory of Australia.
Development of the Molyhil project was expected to commence in the second half of 2012, but was delayed.
Molyhil is one of the three projects being developed by Thor Mining in Australia. 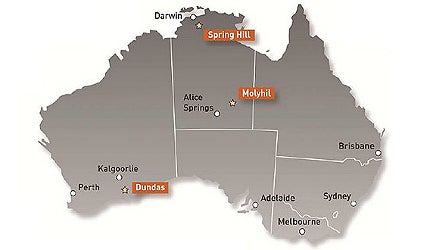 Molyhil tungsten and molybdenum mine is located 220km from Alice Springs in the Northern Territory of Australia. It is 100% owned and operated by Thor Mining.

"The Molyhil licence was originally owned by Petrocarb Exploration who extracted nearly 900,000t of ore from the mine up until 1982."

A definitive feasibility study (DFS) for the mine was completed in 2007, which indicated a profitable development. The development plan was put on hold following the global economic crisis in 2008.

With the recovery in tungsten and molybdenum prices, development plans have now been renewed. An updated DFS to determine a detailed mine plan and financial feasibility of the project was completed in 2012.

The DFS was updated by Proteus EPCM Engineers. The mine’s development was expected to commence in the second half of 2012, but was delayed. Thor Mining announced an updated reserve statement for the mine in July 2014. The enhanced reserves estimate gives the mine a six-year life rather than the earlier estimated life of four years. The DFS will be further updated based on these enhancements.

Ore is expected to be recovered through open pit operations with an annual production of 400,000 tons per annum (tpa).

Geology of the tungsten and molybdenum mine

Molyhil mine is part of the Neoproterozoic Georgina Basin and the Paleoproterozoic Strangways Metamorphic Complex.

Mineralisation at the Northern Territory-based deposit

Molybdenum and tungsten mineralisation at Molyhil occurs as a magnetite / sulphide-rich hornfels unit. The mineralisation is coarse grained and includes a high proportion of magnetite and pyrite.

Thor commenced drilling activities at the mine in July 2011. The two-stage drilling programme is intended to increase the reserve estimates of the mine.

Six to eight reverse circulation holes will be drilled during the first stage and another six diamond holes during the second. The drilling activities are aimed at identifying new targets and extending the mine’s life.

Mining and processing by Thor Mining

The Molyhil licence was originally owned by Petrocarb Exploration who extracted nearly 900,000t of ore from the mine up until 1982. The mine was later acquired by several companies, until finally being acquired by Thor in early 2005.

"With the recovery in tungsten and molybdenum prices, development plans have now been renewed."

Development of the mine will include expansion of this existing pit. Conventional mining methods will be used at the mine, along with drilling and blasting to recover the ore.

The run-of-mine (ROM) will be located 100m from the processing plant. It will provide facilities for storage and blending of one month’s supply of recovered ore.

Ore processing at the Molyhil deposit

Toro Energy’s Wiluna uranium project lies 30km away from the town of Wiluna in Western Australia. The mine covers an area of 1,500ha.

The tungsten will be recovered using a wet spiral circuit including rougher, cleaner and scavenger methods. The circuit will treat the pyrite scavenger tail through various banks of spirals. From the spiral circuit, the concentrate will be passed through drum and rare earth magnetic separation. This will be followed by high tension separation.

The processing plant also includes milling, classification and flotation enclosed in a process building. Tailings from the processing will be sent to the tailings dam.