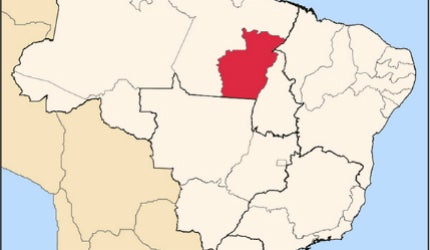 The Antas North open-pit copper mine (Stage 1), fully owned by Avanco Resources, is located in the Carajás Mineral Province of Brazil.

Mining License for the copper mine was granted in September 2014. The mine is expected to be commissioned before the end of 2015 and ramp-up to full production in the first quarter of 2016. It is estimated to have a mine life of nine years.

The processing plant at the mine is expected to have a mill throughput rate of 500,000t/y, and will produce approximately 12,000t of copper metal and 7,000oz of gold credits a year. The project is expected to produce 45,000t/y of copper concentrates with low levels of harmful elements.

Carajás Mine, the world’s largest iron ore mine, is located in the state of Para in Northern Brazil..

Antos North is a part of the Rio Verde exploration area and is located approximately 25km southeast of Parauapebas. The project is located close to the southern border of the Estrela Granite Complex.

The majority of the mineralisation at the mine is concentrated within a steeply dipping body comprising fragments of massive sulphide and disseminated sulphide minerals, within a matrix of hydrothermal breccia.

Mining and processing of ore at the Antas North mine

Conventional open-cut mining using trucks and excavators will be applied at the Antas North deposit. The mining fleet is expected to include a Liebherr R910 excavator, seven Volvo AF40 haul trucks, and two CAT 5150 drill rigs.

The ROM ore from the open-pit will be stockpiled on the ROM pad located approximately 500m away from the pit. It will be blended before transporting to the crushing plant, which comprises primary jaw and secondary cone crushers.

The crushed ore will be stockpiled before transporting to the ball mill grinding circuit, which will be equipped with a 1,350kW drive. At the ball mill, the crushed material will be grounded with water to produce a slurry, with 80% of the particles ground to a size smaller than 150µm. The resultant mill discharge will be pumped to the flotation beneficiation plant by slurry pumps.

The slurry from the ball mill will be separated into two streams, the first of which represents just 10% by weight of the flotation feed, but expected to recover / contain approximately 97% of the copper and 90% gold.

A new Metso plate and frame filter press, supplied from Europe, will be installed to dewater the concentrate.

"A new Metso plate and frame filter press, supplied from Europe, will be installed to dewater the concentrate."

The project is estimated to require an investment of A$80m, of which A$63.6m was financed through the placement of shares worth approximately A$19.9m and Entitlements Issue worth A$44.2m. The financing is supported by existing institutional shareholders and Greenstone Resources, a mining and metals fund.

The remaining amount will be funded through a royalty transaction signed with a fund managed by BlackRock, one of the shareholders of Avanco Resources.

Power will be supplied from state-owned Parauapebas electrical grid distribution and transformer station.

Avanco Resources entered an agreement to secure a 10km corridor to provide for the mine access road and power line easement. The corridor will connect the mine to the main interstate asphalt highway and further to the Carajas regional centre of Parauapebas.

MACA was engaged to conduct open-pit mining services, including drilling, blasting, loading, and hauling, at the Antas North stage 1 project.

ONIX Engenharia of Belo Horizonte, Brazil was engaged to develop the basic and detailed engineering for the processing plant and other infrastructure.