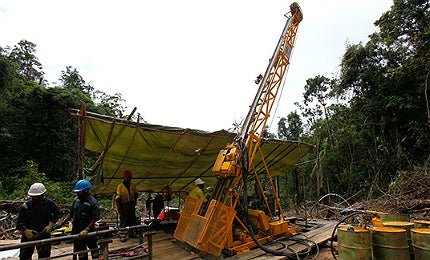 Frieda River Project is located in the provinces of Sandaun and East Sepik in Papua New Guinea. It is one of the biggest copper and gold deposits found in the Asia-Pacific region.

The mine is jointly owned by PanAust (80%) and Highlands Pacific (20%). PanAust acquired the majority stake earlier held by Glencore in August 2014, becoming operator of the mine. The acquisition agreement was made in October 2013.

The project is currently in the feasibility stage which is expected to be completed by the end of 2015 at an estimated cost of $25m. The mine will be developed as an open cut operation.

Based on the pre-feasibility study completed in October 2010, the mine was expected to produce 246,000t of copper and 379,000 ounces (oz) of gold annually. First production was expected in 2017. The estimated mine lifespan was more than 20 years. A due diligence evaluation held by PanAust and Highlands Pacific however estimated average annual production of 125,000t of copper and 200,000oz of gold in concentrate assuming a processing rate of 30 million tonnes per annum. The total project cost was estimated at $1.7bn.

Six main deposits, namely Horse, Ivaal, Truki, Nena, Koki and Ekwai, have been identified at the Frieda River copper and gold mine. The mine also contains several other unexplored deposits.

“PanAust is the operator of the mine and holds 80% interest in the mine.”

These deposits are part of the Frieda River Igneous Complex (FRIC) located in the southern part of the New Guinea Thrust Belt. They were formed during the Miocene age through extensive thrusting and faulting.

Estimated resources of the mine include 12.9 million tons (mt) of contained copper and 20 million ounces (oz) of gold.

Measured and indicated resources at Nena are estimated at 33mt graded at 2.81% Cu and 0.65g/t Au.

Mineralisation at the Frieda River project

The Horse / Ivaal / Koki deposits are spread across an area of three square kilometres of the FRIC. They contain porphyry copper-gold mineralisation associated with multiphase intrusives in the form of chalcopyrite, bornite and chalcocite. High grade mineralisation is found to occur in steep north-west trending structures.

The Frieda River project is one of the most isolated and remotely located mines in the region.

“These deposits are part of the Frieda River Igneous Complex (FRIC).”

It features rugged terrain, which makes it one of the most technically challenging mine sites in the world.

Development of the mine will include construction of a crushing and process plant, a 160MW hydro-electric dam and power station, maritime ports, 120km of new access roads, large mining infrastructure and an airport.

The entire infrastructure will be located within the rugged highlands of Papua New Guinea.

Mining the copper and gold deposits

Frieda will be mined through open pit operations. Mining will be initially carried out at the Horse / Ivaal / Trukai deposit. The recovered ore will be processed by conventional comminution, grinding and flotation method to produce a copper-gold concentrate.

The concentrate will be transported through a pipeline to a dewatering plant located at the Sepik River. It will further be transferred onto river-going barges to a concentrate silo vessel for export.

Sinclair Knight Merz (SKM) was responsible for developing a sustainability integration plan for the mine as part of the pre-feasibility study. SKM worked in collaboration with Bechtel, Pöyry and SMEC for the project. BMT was contracted to carry out an aquatic biology, water and sediment quality monitoring programme for the mine.

Douglas Partners is carrying out the feasibility study for the mine.

The Porgera gold mine is located in Enga Province, about 600km north west of Port Moresby.

The Solwara 1 project is located in the territorial waters of Papua New Guinea (PNG).