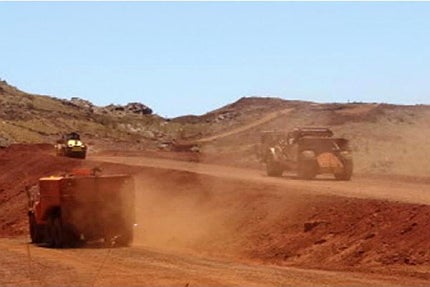 Mt Dove open pit iron ore mine is located 65km south of Port Hedland, in Western Australia. It is a Direct Shipping Ore project and is being developed as a part of the Pilbara mine development project.

The final crushed product from the mine will be transported to the Utah Point Port Facility at Port Hedland.

Atlas Mining acquired the rights to mine iron ore at Mt Dove mine from De Grey Mining. It is Atlas’s third mine in operation and is expected to have a mine life of approximately 15 months. The mining activities at Mt Dove commenced in November 2012.

Mt Dove is an integral part of Pilbara Craton’s North Pilbara granite-greenstone terrain. The terrain is composed of high quality granite-greenstone rocks, which form the foundation of the sedimentary rocks. The rocks are categorised to be of De Grey Super group and are estimated to have been formed 3,525 to 3,165 million years ago.

Most of the North Pilbara granite-greenstone terrain is filled with granitoid complexes. Mt Dove forms part of the magnetic anomaly which lies to the south of the Central Pilbara Tectonic Zone and Carlindi Dome.

The combined indicated and inferred resources have been estimated at 2.5mt grading 57.7% Fe.

Conventional drill and blast method is applied at Mt Dove along with load and haul process. The mined ore is transported via haul trucks to the 28ha run-of-mine (ROM) facility, where it is stockpiled for crushing and grading.

The ROM facility is made up of four ROM stockpiles. The stockpiles, with a total capacity of 310,000t, are constructed at the centre of the crusher feed bin.

The mine is installed with a single mobile crushing and screening plant which can produce all-fine product. The ore is passed through three crushing stages and two screening stages before being transported to the port. It is directly exported without any further processing.

The oversized ore is heaped and broken on a campaign basis. It is fed back to the crushing plant for obtaining the optimal export size.

Mt Dove mine facilities and construction

Major construction works at Mt Dove included a crossing path over Epic Energy’s Wodgina gas pipeline, which passes through the mine site. The works also included construction of a workshop for heavy equipment and associated earth and road works.

"The final crushed product from the mine will be transported to the Utah Point Port Facility at Port Hedland."

The primary power generation facility consists of multiple diesel generators. The generators include a sound-attenuated container along with associated electrical works and diesel fuel storage.

The fuel storage and refuelling facility at the mine is capable of storing 136,000 litres of fuel. A weighbridge and turning lane are established on the mine site access road adjacent to the ROM facility.

Workers are accommodated at the 60-person accommodation camp.

The wastewater treatment plant can process 40m³ per day. It comprises of Submerged Aeration Filter unit for effective impurity removal.

The financing was intended for the development of the Mt Dove, Abydos and Mt Webber mines, and expansion works of Yard 2 at Port Hedland.

Contractors involved with Mt Dove mine

Mining And Civil Australia (MACA) was awarded the contract for providing mining services at Mt Dove mine. The scope of services includes drilling and blasting, ore loading and hauling.

Barnes Hill nickel-cobalt mine is located in the Tamar Development Corridor and is situated near Beaconsfield in Tasmania, Australia.

Nullagine is an open-pit gold mine located in the East Pilbara District of Western Australia.