Quartz and wallrock capped by brecciaa on the top

Expand
Enterprise gold mine is located in the Ora Banda district of Australia.
The Enterprise deposit is part of the Paddington mining area.
Ongoing exploration is expected to further expand the resources of the Enterprise gold deposit. 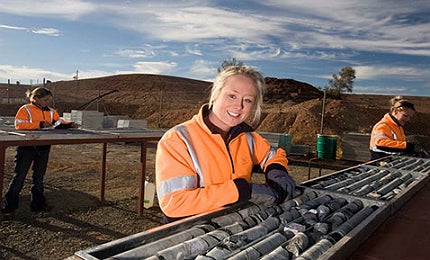 Enterprise gold mine is located 68km north-west of the Kalgoorlie gold province, in the Ora Banda district of Australia. It is owned by Norton Gold Fields, a company based in Australia. The mine is part of Paddington mining and exploration package, which covers 678km² in Kalgoorlie.

Norton Gold Fields will invest about $40m in the development of the Enterprise mine. A credit facility from the Industrial and Commercial Bank of China will be used to partly fund the project.

The net present value of the mining project is estimated at $142m, assuming an average gold price of $1,600/oz can be procured. Mining operations are expected to start fully by November 2013.

Gold mine reserves and production rates

Geology and mineralisation at the Enterprise deposit

Enterprise is a high-grade deposit located in the Norseman-Wiluna Greenstone Belt in the Eastern Goldfields Province. It is hosted by dolerite sill.

The deposit is capped by breccia with quartz stockwork and wallrock below. Mineralisation is open and controlled by two intersecting northeast trending structures.

Norton Gold Fields plans to use either the open-pit or underground method, or a combination of both, to extract the gold from the Enterprise deposit. A definitive feasibility study to determine the optimal mining method is currently underway.

Open cut mining will involve pre-stripping of overburden and conveying waste to a depleted open pit. Underground mining will be carried out using a decline from the bottom of the existing pit. The ore will be extracted using sublevel caving.

The ore will be transported to the Paddington mill on haulage trucks by road. Mining waste, resulting from the underground operations, will be either used as backfill or stored in the open pit.

The deposit is also accordingly classified into two portions based on the depth of mining. The shallow portion is planned to use open cut methods, while underground mining can be used for the deeper section. The cut-off grades for the open cut and underground resources are fixed at 0.7g/t and 1.5g/t Au respectively.

Historical mining at the Enterprise deposit was through open cut methods to depths of up to 100m. Norton plans to restart open pit operations at the mine by April 2013. SRK Consulting carried out geotechnical studies for the pit design. Underground operations, if feasible, will commence later.

Ore recovered from the Enterprise deposit will be sent to Norton’s Paddington Mill for processing. The Paddington Mill, located about 38km north-west of Enterprise, has a processing capacity of 3.3 million tonnes per annum (mtpa).

The project will benefit from the existing power, mining infrastructure and utilities at the Ora Banda project site. Norton also announced an investment of $39.5m in January 2013, to purchase a mining fleet for the Paddington operations, including the Enterprise project.

The completion of the Enterprise mine development will have a positive impact on the Paddington mill, which will benefit economically from cost savings due to better utilisation of processing capacity.

Future developments at the Enterprise project

Two more prospects, namely Galactica and Enterprise West, are being explored to expand the mineral resources of the Enterprise project.

“Norton Gold Fields will invest about $40m in the development of the Enterprise mine.”

Reverse circulation and diamond drilling were conducted in 2012 in Enterprise, as well as the Galactica and Enterprise West prospects. A total of 130 holes were drilled to a gross depth of 21,535m.

The initial results are encouraging and good scope for expansion of the reserves is indicated, according to Norton.

Drayton mine is situated in the Upper Hunter Valley of New South Wales, Australia. The mine produces thermal coal and has been operating since 1983.