Expand
Mineralisation extends over a strike length of 40km and is divided between Kalia I and Kalia II.
The ore body contains an estimated 6.16 billion tonnes of inferred JORC magnetite resources.
It is owned and operated by Bellzone Mining. 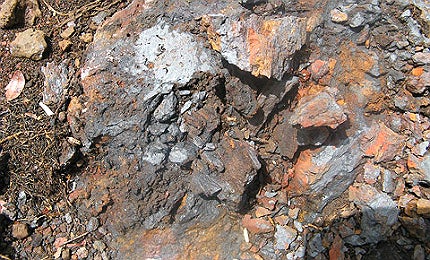 The Kalia iron ore mine is a 50mt/y project under development in the Republic of Guinea, West Africa. It is owned and operated by Bellzone Mining. It will begin production in 2014 and will ramp up to full production by 2018.

The ore body contains an estimated 6.16 billion tonnes of inferred JORC magnetite resources. As of December 2012, Bellzone has identified the availability of 87.5mt of direct shipping ore (DSO) graded at 54.1% Fe at the mine.

The project, funded by the China International Fund, is estimated to cost $4.45bn and will include associated rail and port infrastructure.

Geology and mineralisation at Kalia I and II

"Bellzone has identified the availability of 87.5mt of direct shipping ore (DSO) graded at 54.1% Fe at the mine."

The deposit is characterised by peaks of 1,060m. Mineralisation extends over a strike length of 40km and is divided between Kalia I and Kalia II, mapped at strike lengths of 19km and 20km, respectively. The Kalia I deposit is found within the axial region of the Lower Proterozoic greenstone belt.

The west-northwest trending belt includes rocks of the Kambui supergroup and is surrounded by gneiss granites of the early proterozoic period in the north and the biotite granite gneisses in the south.

Rocks enclosing the mineralised zone are composed of a wide range of schists. Amphibolites of varied composition are also widely concentrated. The southern margin of the deposit hosts bands of talc-rich assemblages with actinolite-talc and chlorite-talc schists that comprise magnetite dissemination and are ten to 50m thick.

The mineralised zone is dominated by several close-banded iron, amphibole-magnetite schists and talc magnetite schists bearing ore bodies that have a west-northwest strike and a near vertical dip. A late archean-aged intrusive massif containing mesocratic granites and granodiorites is hosted in the west north-west section of the deposit. The south-east section is cut across by massive early proterozioc-aged intrusive body containing monzogranites.

The Kalia II deposit, hosted within the Kambui Supergroup greenstone belt, is geologically similar to Kalia I with identical bounding geology. Structurally, however, the deposit is complex and includes extensive faults and folds. Large agnetite-haematite and magnetite quartzites-bearing bodies are found within the axial zone of the belt.

The belt is characterised by a vertical dip across its length. Inter-bedded schists, amphibolites and banded iron formations with thickness ranging between dozens of metres and 250m constitute the target zone of this deposit. The deposit features steep escarpments formed along ridge flanks with narrow ridge crests.

The project is being executed in three-phases. Phase one, carried out between November 2005 and November 2007, completed the preliminary stages of ore body assessment. Magnetic survey, geological mapping and a surface assay conducted during this phase revealed the economic potential of the iron mineralisation.

"Mining will begin in 2013. Higher grade resources will be targeted during the initial phase of mining."

Phase two, commissioned in November 2007, has completed to date, a 50-member exploration camp and associated services, collection and interpretation of technical data besides assessment of baseline environment impact. In addition, during this phase, a feasible infrastructure solution was developed, the first JORC resource was defined and an implementation plan was established.

Mining will begin in 2013. Higher grade resources will be targeted during the initial phase of mining. Conventional open pit methods, including drilling, blasting and hauling, will be used.

To meet the production of 50Mt/y, two operating pit faces will be required. Approximately 2.5m of overburden will be pre-stripped to open the 20-50m oxidised zone that is characterised by a five to 20m thick surface layer.

Approximately 50Mt of overburden along with waste material will backfill the transport road and the construction pad development. It will additionally be used to level the access roads connecting the mining zone.

Extracted material will be transported to the primary crusher. Over-sized and wet ore will be sent to the ROM stockpile for pre-treatment before it is sent to the primary crusher. Primary and secondary crushing followed by screening will result in lumps and fines sized between -32mm +8mm and -8mm respectively. The lump and fine products will be loaded and hauled to the port.

The largest single producer of bauxite (aluminium ore) in the world, Cie des Bauxites de Guinée’s (CBG) operations are located in the west of Guinea, close to the border with Guinea-Bissau.

The Siguiri gold mine is found within the Siguiri District in the north-east of the Republic of Guinea, West Africa, about 850km from the capital city of Conakry.