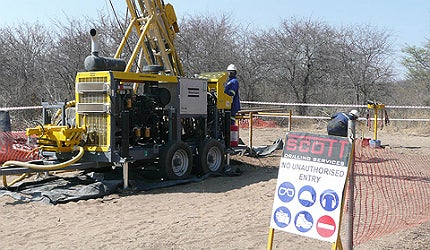 The Boseto copper mine is situated in Ngamiland in the Kalahari copper belt of north-west Botswana. The mine is 100% owned by Australia-based Discovery Metals and is being developed using open cut methods.

Botswana’s Government gave the final environmental approval for the project in June 2010. The mining license was awarded in December 2010 for 15 years.

The project is expected to create direct employment for about 250 people and additional indirect and contractor jobs.

Geology and mineralisation at Botswana’s mine

"Underground mining is expected to start from the Zeta prospect in the last quarter of 2013."

The Boseto copper mine consists of three main prospects – Zeta, Plutus and Petra. The mine is part of the Ghanzi-Chobe fold belt, which is a 140km-wide zone of deformation.

The mine is found to contain copper mainly in the form of chalcocite. Minor amounts of bornite and other copper sulphides are also found. The copper occurs in steeply dipping areas with a width of two metres to 20m.

Malachite and chrysocolla mineralisation is also found at shallow depths. It will be stockpiled and will not be processed for the first 15 years.

Reserves, mining method and ore processing at Boseto copper mine

"The Boseto copper mine consists of three main prospects."

An open cut method will be used for the first three years of mining. Mining at the Zeta prospect is currently ongoing with 500,000t of ore being mined and stockpiled by the end of May 2012. Crushing of ore was also completed during the month.

Underground mining is expected to start from the Zeta prospect in the last quarter of 2013, with production expected in 2015.

A 3mtpa conventional copper silver concentrator has been constructed for processing the minerals. The concentrator includes a comminution circuit wherein the ore undergoes a three stage crushing followed by ball milling and grinding.

Costs and financial support for the African mine project

As per the BFS, the mining costs are estimated at $3/lb of copper and $28/oz of silver.

The funds will be used for the construction of the copper silver concentrator ($105m) and for the mobile mining fleet ($75m). Caterpillar will supply the majority of the fleet for the mining operations. In addition, the syndicate will provide $25m towards cost overruns, working capital and hedge lines.

Transportation and handling of concentrate

Concentrate produced at the plant will be packed into 1t-2t bags and transported to African smelters or an international shipping port.

Discovery Metals signed a five year agreement with Transamine in March 2010 for 100% offtake of the Boseto concentrate. The agreement will reduce Discovery Metal’s risk exposure and improve its working capital.

Contractors and environmental studies at the Boseto deposit

Any potential impacts were termed as manageable and Discovery Metals is expected to undertake several mitigation strategies to deal with such impacts.

Orway Mineral Consultants (OMC) specialises in sizing all aspects of...

The Lucky Bay Garnet Project (Lucky Bay) is located in the Midwest region of Western Australia. It is 100% owned…

The Mount Pleasant coal deposit is located in the Hunter Valley region of New South Wales (NSW), Australia. Owned and…