Expand
The Ghaghoo diamond mine was officially opened in September 2014.
The Ghaghoo deposit is expected to produce between 200,000ct and 220,000ct of diamonds. Image courtesy of Judy van der Velden.
Borehole drilling method is applied at the underground diamond mine. 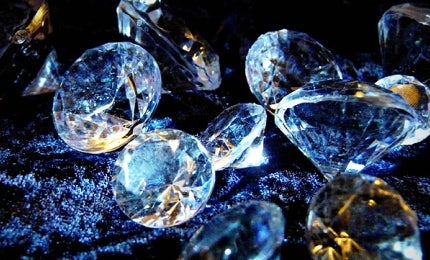 Gem Diamonds Botswana, a subsidiary of Gem Diamonds, owns the Ghaghoo diamond mine, which houses two of the world’s biggest diamond mines, including the world’s largest diamond producing mine Orapa. Previously known as Gope mine, Ghaghoo is an underground mining operation mainly focused on extracting diamond ore from the GO25 kimberlite pipe.

The mining license for Ghaghoo mine was obtained in January 2011 and construction commenced shortly after. The mine was officially opened in September 2014. It is expected to have a production capacity of 720,000t a year, while extracting between 200,000 carats (ct) and 220,000ct of diamonds.

Ghaghoo diamond mine development is estimated to cost $96m and is expected to create 250 jobs once Phase I is fully operational in 2015. It received $25m short-term unsecured facility from Nedbank Capital in January 2014 for the completion of the first phase.

Gem Diamonds is developing the Ghaghoo mine in three phases. The first phase, which is being built in conjunction with the feasibility study, is aimed at confirming the grades and prices of diamonds and testing various processing techniques. The second phase focuses on ramping up the production, while the third and final phase will concentrate on achieving a steady production.

The construction of a 473m-long access decline started in the fourth quarter of 2011 and was completed in July 2013 as part of the first phase. The first 70m were driven using an open face tunnelling shield at an inclination of 8°. A conventional drill-and-blast technique was applied down to the 150m level. The decline was concrete-lined using precast concrete segments forming a ring.

Gope Exploration Company, which owns the Gope Deposit, was acquired by Gem Diamonds in 2007. Discovered in 1981, the deposit was then renamed as Ghaghoo diamond mine.

The Merlin diamond mine is located approximately 100km south of Borroloola and is the only diamond mine in Australia’s Northern territory.

The Ghaghoo deposit lies in the Central Kalahari Game Reserve (CKGR) and comprises two kimberlite pipes, GO25 and GO136, of which GO25 is expected to host more than 100 million tonnes of diamonds.

The deposit is part of the Kalahari formation, filled with calcified and silicified sands up to a depth of 25m. Beyond the 25m level, the wall rocks of the Gope Kimberlite consist of Karoo basalt to 391m and Ntane sandstone formation from 391m to an unconfirmed depth. The Ntane formation comprises monotonous pink, buff and white grained sandstones with layers of mudstone and siltstone.

Indicated and inferred diamond resources were estimated to be 108.2 million tonnes of ore graded at 18.98ct/100t containing 20.53 million carats of diamonds.

Mining at the underground Ghaghoo diamond mine is conducted in three stages. The first stage involves mining using sub level cave (SLC) method by developing horizontal and parallel tunnels through the ore body.

Ore is extracted using drilling and blasting, and then loaded into the production tunnels using drill rigs and load haul dumpers. The dump trucks transport the ore to surface via the decline. The second and third stages use SLC and block cave mining methods.

The processing facility comprises a primary crusher with a capacity of 100t/h, an autogenous milling and screening section, a 65t/h dense media separation (DMS) module and a recovery section that uses grease belt and wet X-ray machines.

"Road access to the mine site is through a 160km sand track from the Lephepe town."

Major works included the construction of the underground tunnel, ball mill, processing plant and other infrastructure facilities. Road access to the mine site is through a 160km sand track from the Lephepe town.

Workers are accommodated at the 350-person tent camp constructed at the mine site. Water for first phase operations is provided by the boreholes and mine decline.

In July 2011, Redpath Mining was awarded a $10m contract to develop the access decline and the ventilation shaft.

Consulmet was awarded with a lump sum turnkey contract for constructing and commissioning the 100t/h processing facility.