24,111t of copper including in concentrate and as cement 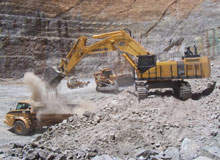 The Tritton copper mine is located near the town of Nyngan in central New South Wales, Australia, and is owned by Straits Resources.

Mining within the Tritton lease areas first started in 1992 at the Murrawombie open pit as part of the Girilambone copper mine and involved the mining of several copper oxide ore deposits by open pit mining methods and SX/EW processing. Open pit mining at Girilambone terminated in 1999, although copper production continued for two years.

In 2002 Australian miner Straits Resources bought a majority stake in the mine, buying the minorities in Tritton Resources to reach full ownership in 2005.

Blind at surface, the Tritton underground ore deposit was discovered after the drilling of a geophysical anomaly. Mining of the orebody started in 2004 with the development of an access decline. Stope production began in March 2005.

“The Tritton copper mine is located near the town of Nyngan in central New South Wales, Australia, and is owned by Straits Resources.”

As the mine developed, similarities emerged between Tritton and the previously mined satellite orebodies. Resource extension drilling commenced in 2006, targeting the sulphide ore bodies below the oxide pits. Straits reported this drilling as successful, with enough resources confirmed to support the development of new underground declines at Larsens/North East and Murrawombie together with a plant upgrade.

A strategic review of the mining operations at Tritton during the first quarter of 2008 saw the incumbent contractor replaced by a local company. This changeover, as well as low grade slopes and congestion, resulted in a reduction of underground production levels through late March and April of 2008. Development of the decline advanced, with ore production scheduled for September 2009.

However, as copper prices fell due to the financial crisis, the development of the declines at the Murrawombie and Larsens/North East ore bodies was stopped in late 2008. Development resumed at the North East body during the first quarter of 2010. Full production from the ore body is scheduled to commence by July 2010.

Comprising a fairly folded sequence of lower green schist facies, pelitic schists, mafic schists, shales, greywackes and with quartzites dipping shallowly towards the east, the principal minerals throughout the Tritton orebody are pyrite, chalcopyrite and quartz. Bornite is also present in the upper level of the orebody where some accessory tetrahedrite, digenite and chalcocite have also been observed mineralogically.

During the production life of the Girilambone mine, exploration work mainly targeted oxide ores for the SX/EW plant. As a result, minimal drilling was undertaken to target the sulphide resources known to exist, especially those resources below the oxide pits of the Murrawombie, Larsens, Hartmans and Northeast mines.

A significant exploration programme commenced at Tritton in June 2009. By the end of the first quarter of 2010, approximately 2,513.7m of reverse circulation drilling was completed at Tritton Deeps.

Straits reported that the Tritton expansion project was completed in 2009 with the plant upgraded to provide 1.4 Mtpa throughput.

Tritton operates a conventional crushing and flotation plant. The concentrate produced is relatively clean and acceptable to virtually all smelters in the Asia Pacific region. Due to the expansion project, processing plant capacity has been increased from 1Mt to 1.4 Mtpa.

The lower production was caused by the changeover to a new contractor as well as low grade stopes and production congestion as the workings emerging from the narrow gap zone between the upper and lower ore bodies.

In in the year ending June 2009, production from Tritton was 24,111t of copper including in concentrate and as cement.