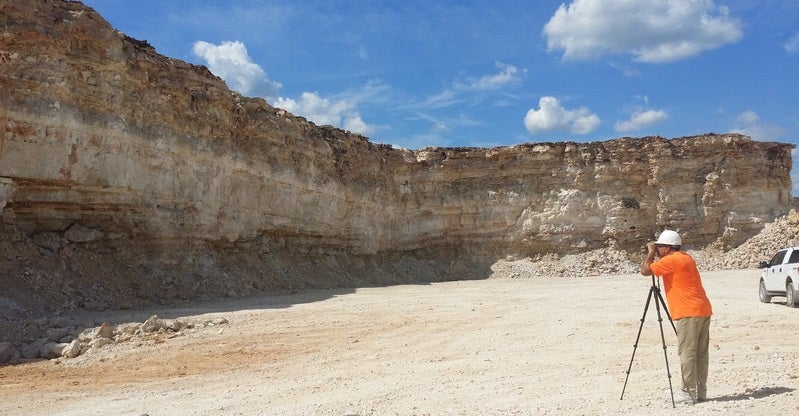 Laser Technology (LTI) specialises in the design and manufacture of innovative laser-based tools to measure distance, heights, and azimuth.

Mining applications, such as rock face profiling for blast design, stockpile volume measurements, and geological mapping are all critical in making smart management decisions and maintaining a safe work environment. Laser Technology has an array of laser-based measurement tools that make mining tasks easier and safer.

The company provides a laser face profiling system that takes accurate measurements and calculates bench heights, as well as minimum and optimum burdens.

Due to the harsh conditions, the company recommends a rugged and reliable TruPulse laser range-finder and an Archer data collector to operate its easy-to-use face profiler software.

The enhanced version of the software makes loading explosives more accurate, faster, and cost-effective. It offers an easy interactive interface, useful calculations and features, as well as robust reporting options.

Face Profiler 5.0 for blast design professionals is available for Windows Mobile and Windows 7, 8, and 10.

LTI’s reflectorless laser technology is a fast and safe method of measuring a stockpile volume. The company’s lasers have the ability to measure to almost any surface, including aggregate, coal, wood chips, and asphalt, without the need of a reflector.

TruPulse 360, in conjunction with LTI’s MapSmart™ + Volume software accurately measures the volumes of a variety of materials.

A single operator can quickly gather and record data from a safe distance, with volume calculation results in less than an hour. For enhanced accuracy, pair the TruPulse 200 X with the MapStar Angle Encoder.

With LTI’s unique reflector-less laser measurement technology, clients can quickly and safely map the entire surface of a mine, including unreachable visible structures on highwalls, inclines, and inaccessible or dangerous areas.

For additional productivity, the TruPulse 360 compass / laser can be partnered with GPS, expanding its capabilities by capturing remote GPS locations without ever occupying that point. Crew members can easily learn how to collect and map areas with minimal training.

LTI’s MapSmart software was designed for non-surveyors and its range-finders are simple point-and-shoot tools.

The MapStar TruAngle precisely calculates a turned horizontal angle that can be referenced to any desired point or direction.

When integrated with a TruPulse 200X, clients can capture X, Y and Z coordinates for complete 3D mapping and surface modelling. With a smaller and lighter design, a more simplistic user interface and a lower price point, the TruAngle angle encoder is an attractive, alternative mapping accessory.

When mounted on a tripod, the TruAngle angle encoder is capable of producing +/- 0.05°C in angular accuracy with a simple user interface.

LTI's MapSmart® field data collection software is designed for anyone who needs to quickly and accurately map in the location of features in 3D or measure stockpile volumes.

As the first phase-laser from LTI, the TruPoint 300 is a small, lightweight, compact measuring laser that costs a fraction of conventional technology, such as high-end 3D scanners and total stations.

Blast Design Made Easy with FaceProfiler

Take the guesswork out of blast design with Face Profiler software

Using Face Profiler software has never been simpler or more efficient than it is today.