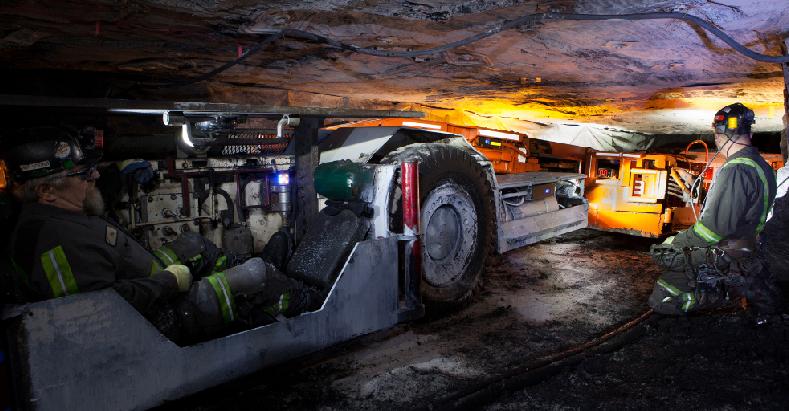 Strata’s proximity detection and collision avoidance technology has been developed in partnership with the US Mine Safety and Health Administration (MSHA) to reduce crushing and pinning accidents and collisions between machinery.

Strata Worldwide is a leading global provider of products, services and technologies that promote and support a high level of safety in mining operations across the globe. One of Strata’s most prominent global safety products is the HazardAvert® proximity detection and collision avoidance system. This established technology is designed specifically to overcome the most prevalent accidents experienced at mines today: the unintentional contact between personnel and machinery as well as collisions between machinery in both underground and surface mining.

HazardAvert is an Electromagnetic (EM) detection, warning and interlocking system for proximity detection and collision avoidance in mining and construction.

It is designed to prevent collisions and works between pieces of equipment, between equipment and people, and between the equipment and stationary objects. HazardAvert detects imminent danger and provides early warning to prevent accidents. It also has the capability to interlock into machine controls to provide automatic emergency braking and stopping.

Electromagnetic technology is unaffected by its environment and the atmosphere, and can easily penetrate coal, rock, construction barriers, stoppings and ventilation curtains to detect personnel and equipment hidden from view.

It is proven for “near field” hazards, warning both equipment operators and personnel-on-foot simultaneously. It can function with hundreds of vehicles and pedestrians in close proximity without latency or delay.

HazardAvert field generators installed on equipment create electromagnetic marker zones around the equipment and are designated as ‘warning’ and ‘hazard’ zones. The zones are sized and shaped according to individual mine requirements.

Individuals wear a personal-alarm device (PAD) that detects these marker zones. If potential danger is detected, both personnel-on-foot and the machine operator are alerted. The miner’s PAD features LED warning lights and audible alarms, and equipment operators receive warnings on a display screen or POD. For surface systems, the inclusion of wide-angle bumper-installed cameras provide live views of the immediate surrounding areas.

HazardAvert electromagnetic zones are fully functional both on the surface and underground. They also remain operational as a vehicle travels between locations.

In surface applications, HazardAvert excels in:

Studies show that a large majority of accidents and injuries occur when machinery and vehicles are travelling at lower rates of speed and in reverse due to close proximity.

In underground applications, HazardAvert excels in:

The core technology and system capabilities of HazardAvert are consistent across all mining environments. For underground coal mining applications, the system components are tested and approved Intrinsically Safe (IS) or are encased in explosion resistant housings.

These systems have been actively used in underground coal mines since 2007, beginning in South Africa. In 2019, HazardAvert was the first Level 9 CAS system to be approved in both South Africa and Australia.

Available now, and fully interoperable to existing systems, is the Strata second-generation Personal Alarm Device, also known as the TPL2.

Physically the TPL2 has been completely redesigned and remanufactured with a new body casing and ergonomic placement of the control buttons. The structure is rated IP66 and has been awarded MSHA (United States), Ex ia (South Africa) and ANZex (Australia) intrinsically safe (IS) approval.

The TPL2 has an optional corded LED cap lamp and includes a red LED that attaches to the hard hat brim.

Newly incorporated into the function of the TPL2 is Strata’s well-known location tracking technology. When used in a mine fitted with Strata’s wireless StrataConnect™ system, the TPL2 doubles as a personal tracking device. The StrataConnect graphical user interface utilises the facility mine map to graphically represent the location and direction of travel of underground personnel.

A range of data is recorded by HazardAvert during operations and is available for reporting. This can be retrieved via Wi-Fi or cable, or wirelessly transmitted over StrataConnect™ wireless networks.

The Technologies that Drive Proximity Detection

Each year, the industry reports injuries and even deaths due to unsafe contact with mobile equipment. In response, a range of proximity detection technologies and collision avoidance solutions have emerged on the market over the years.

Strata Worldwide is pleased to announce the signing of a new distribution agreement with Pennsylvania-based CSE Corporation for the promotion and distribution of CSE’S robust line of mine safety products.

Strata Worldwide is pleased to have accomplished the first-ever application of proximity detection on underground shuttle cars in an Australian coal mine.

Strata Worldwide to Exhibit at AIMEX 2019

Strata Worldwide returns to AIMEX 2019 in August to showcase its portfolio.

Transferring Data in the Real-Time Connected Mine

The use of real-time data in underground mining has moved beyond the point of being a ‘nice to have’ and is now essential for any operation looking to improve productivity or promote maximum health and safety.

Strata Worldwide, a global leader in mine safety innovation, has been working internationally and locally to improve safety in the mining industry through advanced technologies, including proximity detection systems.

Strata Mine Services, a division of Strata Products Worldwide, has completed an asset acquisition agreement with Precision Mine Repair (PMR) of Ridgway, Illinois.

Strata Worldwide is pleased to announce the US Mine Safety and Health Administration (MSHA) Intrinsically Safe (IS) approval of the Trolex TX6355 Sentro.