Any successful mining company is already using robotics. The competitive edge belongs to those who use robotics better. For example, Fortescue implemented robotics for 43% pit-to-port savings; Rio Tinto’s autonomous train saves almost 1.5 million kilometres of annual road travel, and Boliden’s automated drill rigs are capable of 40% more operating hours than conventional alternatives. Below, we will look at each of these in more detail.

Fortescue Metals Group deployed a fleet of autonomous trucks at its Solomon Hub mines. The company began deploying Caterpillar autonomous trucks in 2012, at the Firetail and Kings Valley iron ore mines. The deployment succeeded—the trucks at the initial two mines have moved over 200 million tons of material since 2012—and Fortescue has expanded its fleet to other projects. Pit-to-port costs at the Solomon Hub mines decreased by 43% with the implementation of the trucks. The gains come from a combination of higher productivity and lower expenses.

AutoHaul precludes the need to transport drivers to and from trains, saving ~1.5 million kilometres of road travel each year. Safety is improved by reducing personnel, and because AutoHaul performs better than human drivers at level crossings and has automated responses to speed restrictions and alarms. It also provides environmental gains by calculating the most consistent (least accelerating and decelerating) driving strategy from the train and network topography data. 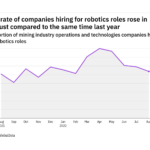 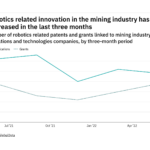 Boliden’s Aitik mine uses automated drilling rigs for its drilling and blasting operations. Such operations require much precision—the distance between each drill hole must be exact—and the material transfer chain is quite delicate. Though the task is difficult, it is repetitive, which made it ripe for automation. The automated rigs that were introduced, known as ‘Pit Vipers’, can move between drill holes autonomously. Predefined tasks can be performed autonomously, and undefined tasks can be performed remotely using the cameras attached. Five drills at Aitik have been upgraded to Pit Vipers. Automation increases annual operating hours, on average, by 40%, from 5,000 to 7,000. Each of these companies has succeeded by using robotics effectively. The bottom line is that mining companies that wish to compete must maximise the utility they derive from robotic technology.