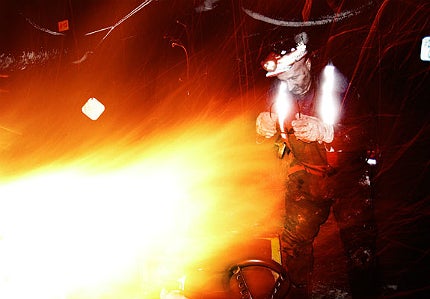 The Benxihu colliery disaster occured on 26 April 1942 in the Honkeiko coal mine, located near Benxi in the Liaoning province of China. It led to the deaths of 1,549 lives and is believed to be the worst coal mining disaster ever.

The fatal explosion of the underground coal mine was caused by a mixture of gas and coal dust. Gas exploded in one of the shafts on April 26, 1942, and sent flames bursting out of the entrance.

The mine had intially been a joint venture between China and Japan, until it was forcefully operated by the Japanese until the end of World War II in 1945.Conditions in the mines were deplorable; food was scarce, and the workers’ clothing was in tatters.

Following the liberation of Liaoning province from the Japanese Army’s control, the Soviet Union conducted an investigation of the mine accident, .

The Courrieres mine disaster in France, occurred on 10 March 1906 in the Courriers mine located near the Pas-de-Calais hills in northern France. The disaster caused the deaths of 1,099, becoming Europe’s worst mining disaster.

The disaster was the result of a coaldust explosion which swept through the mine. Two main causes of the explosion have been hypothesized:

The next morning a huge explosion emanated from the still-smouldering fire at the pit and caused a blast on the surface.

The fissures in the pit’s walls were believed to have allowed the flammable gases to cause a coal dust explosion underground.

The explosion was caused by coal dust and methane gas mixing together until a spark set off a huge explosion. The explosion, which occurred underground, caused thick black smoke to come gushing out of the air vents, before blowing the mine shaft cage, used to take miners in and out of the mine 15m up into the air with a massive blast. As with most Japanese mines the wives worked with their husbands and an estimated 20% of those killed were women.

The disaster was caused by methane explosion, with information about the Laobaidong catastrophe suppressed by the Chinese Government for more than three decades until it was revealed in 1992. Laobaidong disaster is the most fatal coal mine disaster since the inception of People’s Republic of China (PRC) in 1949.

Caused by an explosion in a tunnel at Mitsui Miike coal mine roughly 500 meters below the mine entrance. The blast and flame collapsed the roof at multiple locations in the tunnels which filled with carbon monoxide. Most of the deaths were due to carbon monoxide poisoning.

Most of the poisoned survivors suffered severe brain damage. Miike was one of the oldest and largest coal mines in Japan. It was taken over by Mitsui in 1899. After the investigation of the cause of the accident, the management improved the emergency procedures of the security measures resumed the mine operation — until March of 1997, when the mine was abandoned.

The Senghenydd Colliery disaster occurred at the Universal Colliery in Senghenydd near Caerphilly, Glamorgan, Wales, on 14 October 1913. It is the worst ever mining tragedy in the United Kingdom leading to the deaths of 439 miners.

The fatal disaster was a result of a coal dust explosion in the underground mine. Most of the miners who survived the fire and explosion were killed due to carbon monoxide poisoning.

The subsequent inquiry could not determine the origin of the explosion although it was agreed that methane gas (‘firedamp’) was involved. However, it was apparent that there had been a number of violations of the 1911 Coal Mines Act. In May 1914 the mine manager, Edward Shaw, was convicted of 8 charges and fined £24 – leading a local newspaper to publish the headline ‘Miners Lives at 5½p each‘.

Coalbrook mine disaster took place on 21 January 1960 at the Coalbrook North Mine of the Clydesdale Colliery near Sasolburg, Orange Free State, South Africa. Directly leading to the deaths of 435 it is the worst ever disaster in South Africa’s mining history.

Around 1,000 miners were at work underground at the time of collapse. Half of them could survive by escaping via an incline shaft.

No machine capable of drilling holes large enough through which to rescue people was available anywhere in the country. Following this incident, the Chamber of Mines decided to purchase a suitable drill that would make it possible to reach men trapped underground in coal mines.

Wankie Colliery Disaster in Rhodesia (now Zimbabwe) occurred on 6 June 1972 at the No. 2 mine shaft of the Wankie Colliery, in north-western Rhodesia.  The disaster was caused by multiple explosions in the underground coal mine and led to the deaths of 426 people.

The initial explosion was suspected to have emanated from a dynamite magazine.

Eight men were pulled alive from the mine after the initial explosions. Two new explosions on 7 June poured clouds of poisonous gas into the 3 miles (4.8 kilometers) of tunnels, making further rescue attempts impossible.

Oaks Colliery explosiontook place on 12 December 1866 at the Oaks Colliery, near Stairfoot, Barnsley, in South Yorkshire. It is the second deadliest coal mine disaster in the United Kingdom, with a death toll of 388.

It was a firedamp and coal dust explosion suspected to have been ignited by the digging of new workings at the underground mine. The mine was known for containing firedamp since its first disaster in 1847 that killed 73 people.

The Dhanbad coal mine disaster occurred on the night between 27th and 28th May in the Dhori colliery near Dhanbad, the major coal mining town in India. The disaster led to the deaths of 375 miners.

Monongah Coal Mine Disaster occurred on 6 December 1907 at two mines of the Monogah mine facility in West Virginia.  The worst coal mining catastrophe in the US, the disaster  led to the deaths of 362 people. Of which 171 of them were Italian migrants.

Rescuers could only stay in the mine for 15 minutes at a time due to the lack of breathing equipment. The inability to clear the mine of gases transformed the rescue effort into a recovery effort. One Polish miner was rescued, and four Italian miners escaped. The source of initial ignition for the explosion was attributed to either electric arcs or open lights.