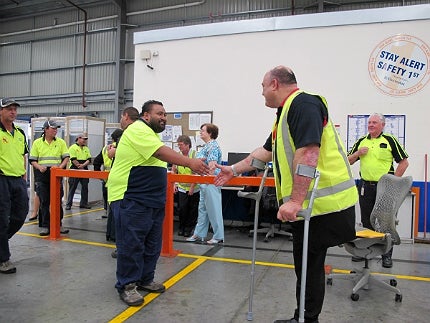 Australian Paralympian Ben Houlison was working in a New South Wales coal mine when, unexpectedly, he was crushed into the roof of the mine by a piece of machinery, which severed his spinal cord and left him paralysed.

"The talks are organised by WorkCover NSW and aim to improve health and safety practise in the mining industry."

No longer able to work as a miner, Houlison went on to become a champion Paralympian adaptive rower. Now he, along with many other Paralympians, shares his story with the mining workforce as a warning about the importance of health and safety in the workplace.

Houlison’s life-changing accident is just one example of the kind of devastating stories that are shared by some Australian Paralympic Committee (APC) members at so-called ‘toolbox talks’.

The talks are organised by WorkCover NSW and aim to improve health and safety practise in the mining industry. The APC and the industry say the talks have so far been extremely effective, with 68% of firms saying they think it makes an immediate and noticeable impact on health and safety.

The APC’s director of commercial, Ian Laing, explains why he believes this unconventional approach to health and safety training works and how miners can both relate to, and be inspired by, Paralympians.

Heidi Vella: How did the programme come about?

Ian Laing: The APC had previously partnered with a similar organisation in Victoria in the run up to the Sydney 2000 Paralympic Games.

WorkCover NSW got in touch based on the success of that programme, and since then it’s gone from strength to strength. Due to a number of our Paralympians having acquired their disability through workplace accidents, a partnership with WorkCover NSW was a natural fit for us, in order to help raise awareness of the importance of workplace safety.

HV: What do Paralympians discuss with the miners during the ‘toolbox talks’?

IL: Athletes talk about two key areas: incident prevention and return to work. The first area is concerned with helping workers understand risk and taking steps to ensure their work environment and practices are as safe as possible.

They also discuss how you deal with things should you be unfortunate enough to be involved in an incident. Athletes tell their own story, how the accident affected them, their families and colleagues. There’s a really positive message around how people can go on to lead successful, fulfilling lives post injury.

HV: Which Paralympians are involved in the programme?

IL: Those involved include world champion water skier Scott Reardon, who became disabled through a farming accident, snow skier Shannon Dallas, who became a Paraplegic after a building site accident, volleyball player Nigel Smith, who lost his left leg in an industrial accident, Ben Houlison, who was injured in a mining accident, and power lifter Kahi Puru, who was crushed by a fork lift.

All eight Paralympians involved acquired their disability through incidents in the workplace. Many are now retired from competitive sport, but we do have some active athletes involved.

HV: What kind of feedback from miners has the programme had?

IL: Worker reaction to our Paralympian speakers has been overwhelmingly positive. We find that miners, along with many other trades, are able to put themselves in the shoes of the athlete and think ‘that could have been me’.

"The APC and the industry say the talks have so far been extremely effective."

An example of a comment from a recent feedback form, which encompasses a common theme, is ‘thanks – a good reality check. We tend to take simple things for granted’.

Our athletes with a mining background have the ability to connect directly with miners – they’ve worked in the environment and know the industry jargon.

This unique aspect rings true with the workers and the feedback shows it’s a programme that really cuts through.

HV: How successful has the programme been at improving workplace health and safety?

IL: Feedback shows that 68% of firms think it makes an immediate and noticeable impact – this figure is low ball as recent participants couldn’t say what difference it’s made, as yet. We believe the real figure is around 80%.

The reason why is because of the way training is delivered – verbally – plus, the skill of the athletes involved and the powerful nature of their story.

HV: Is there a worry that workers will take on the words of the speaker temporarily but soon fall back old habits?

IL: Our programme has to be part of an integrated safety system. We can provide the inspiration to stay safe, but companies need to work at this on a continuous basis.

HV: Besides health and safety, how else can Paralympians inspire workers?

"Feedback shows that 68% of firms think it makes an immediate and noticeable impact."

IL: Each of the athletes have their own unique story and bits of wisdom they can impart, from finding the physical and mental strength to learn to walk again, to showing how life changes after an accident and how to adapt to new circumstances.

The inspiration element is not to be underestimated; we find an attendee’s general outlook is more positive after the talk. One piece of feedback we’ve had is ‘Truly inspirational – very informative and life changing’.

HV: What is the future of the programme?

IL: We have extended our partnership with WorkCover NSW through to 2016 and we’re delighted it will continue.

Mining in Mongolia: a risky business?

A wealth of proven resources has attracted mining giants from across the globe to Mongolia. But could the resource explosion prove dangerous to Mongolia’s boom economy?

Australia’s goal to raise $2bn from the mineral resource rent tax was missed by a clear mile in 2012.