World-class mine restoration in the Amazon and beyond
Menu 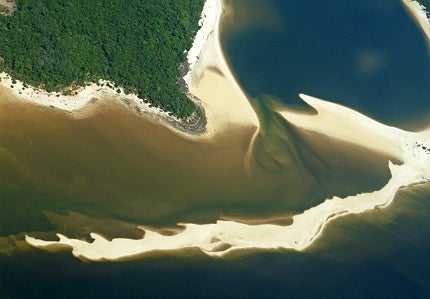 After working for 12 years on the Eden project in Cornwall, UK – which transformed a China clay quarry into a sustainable visitor destination, attracting a million people a year – scientist Peter Whitbread-Abrutat, in 2011, took a sabbatical to travel around the Americas in search of world-class mine restoration projects.

He wanted to find answers to one of the most challenging aspects of mining today – as miners move into more ecologically sensitive areas, such as the Amazon, which are often inhabited by small communities, how do companies restore the environmental integrity of the land after a mine is closed in such a way that will also serve to sustain the socioeconomic needs of the local community?

Whitbread-Abrutat’s journey, funded by the Winston Churchill Memorial Trust, took him from the mountain-top removal coal mines of Appalachia to the Everglades, Costa Rica and the Galapagos Islands, to Atlantic rainforests and farmlands and logged forests in Chile and Argentine Patagonia.

He ended up in Brazil’s rapidly growing mining industry, where he encountered the MRN Trombetas and ALCOA Juruti Amazon mines, both of which are known to take great pride in their corporate responsibility. On his return in 2012, he wrote a report detailing what he learnt.

Whitbread-Abrutat now inspects mines as a principal environmental scientist for Wardell Armstrong International. He shares his thoughts on successful mine restoration, the key problems he has identified and explains how the mining industry actually acts as a force, preserving parts of the Amazon.

Heidi Vella: Why did you decide to go on this journey through the Americas?

"When the mine closes the community can be left without jobs and supply chains that fed the mine and go into economic decline."

Peter Whitbread-Abrutat: People become a bit blinkered and they don’t see beyond the boundaries of their own expertise or their own interests.

So I deliberately went and organised a journey through the Americas, particularly, South America, because I was interested to see what other kinds of landscape restoration there were beyond mining and what they could offer the mining industry in terms of good practice.

The reason I chose South America is because one of the big challenges at the moment is socioeconomic regeneration of local communities. When the mine closes the community can be left without the jobs and supply chains that fed the mine and can go into economic decline.

HV: Can you tell us about some of the projects you came across?

"They dig out the aluminium, which is quite shallow, and they then back fill with the soil, and they can plant trees in it."

When Trombetas began the environmental movement was just beginning. They spent an awful amount of effort and time working out how to restore the Amazon rainforest on that mine footprint. They dig out the aluminium, which is quite shallow, and they then back fill with the soil, and they can plant trees in it. The oldest forest they have restored is around 25 years old and they record that, based on all their ecological indicators for performance, it is about 70% restored.

The interesting comparison is the Juruti mine, which is nearby but 30 to 40 years younger. Not only are they learning from Trombetes ecological restoration techniques, but the imperative is what happens after to all the people that live in that area, because they will be needing jobs.

So they are looking at ways to manipulate the forest to provide non-timber forest products such as Brazil nuts or honey, as well as developing small scale farming projects. They are also developing little community nurseries to help provide trees for the restoration project work.

HV: Is Brazil leading the way in land restoration?

PWA: There are good landscape restoration projects in most parts of the world. The thing is you might not hear about them because the people that are doing them aren’t necessarily interested in promoting their own work. In Europe there is lots going on, there is lots going in Africa, Australia, but trying to find out about them is like a detective story.

HV: From what you’ve learnt, what would you say are the steps to successful land restoration?

PWA: The main key to success is controlling the land. If you don’t control the land, that doesn’t necessarily mean own it, but develop some kind of system of management so you control the land, you can actually get on with the restoration work.

"Develop some kind of system of management so you control the land, you can actually get on with the restoration work."

The other one is funding. There is a lot of money that goes through mines. The whole point of a mine is to take value out of the ground and move it somewhere else; it is a very, very tense economic driver. So funding for mining landscaping projects shouldn’t really be a problem, but it is because there [are] a lot of abandoned mines around the world still causing problems that need to be restored. The people who run those mines tend to no longer exist and it is then defaulted to the government.

All good practice projects require involvement from a range of stakeholders, whether that is the mining company local communities, governments, international funders and possibly international NGOs. You also need to involve the local communities in a meaningful way rather than just telling them what is going to happen, because, at the end of the day, they are the ones that are going to be left with this land.

In the case of the Juruti mine, when they were planning the mine in the 1990s, there was a lot of resistance and the mining company had to engage [with locals], probably more than they would have done, because the eyes of the world was on them. They have developed all kinds of community committees and stakeholder groups to discuss issues.

HV: What are the key problems holding back good mine restoration projects?

Mines like Carajas, which have got holes several hundred metres deep, are never going to get forest over that. The interesting thing is, if you look at satellite pictures of Carajas mine, it is surrounded by hundreds of thousands of hectares of, more or less, pristine rainforest and then outside of that is just an area of agricultural land where all the forest have been destroyed.

What has happened is the mining and the exploration licence areas, which are contiguous, is relatively protected because the mine owns it or controls it. Outside the area, people have just been able to go in and chop the forest down to create farmland. So even though that whole area isn’t going to be mined or explored, most of it is going to be left pristine; they have essentially created a defacto nature reserve.

HV: In your role as a mining and environment consultant how often do you come across environmental problems?

PWA: Most of the time. Most of the mines we work on are what you would call second tier mining companies, so they are not the big international multinationals such as Anglo American or Rio Tinto. The second tier seems to be less good at implementing best practice in many respects.

HV: Why do you think best practice is not always adhered to?

PWA: There is a whole raft of reasons. The big one is lack of regulation by host country governments. So for example, a lot of mines are in developing countries, and even in places like South Africa, they just haven’t got the capacity in government regulation for people to go out and check the mining industry.

"There is an educational aspect to it, as well as an attitude aspect as well."

Another problem is, some countries, particularly in the former Soviet Union, even though legislation exists, it is just not enforced. The mines are in the middle of Siberia so no one wants to go there. The mining people in a lot of these mines are, if they are not regulated and they don’t have a lot of environmental understanding, in the middle of nowhere and they probably don’t see a problem with dumping stuff or pumping stuff out into the rivers, and things like that.

So there is an educational aspect to it, as well as an attitude aspect as well.

HV: Does there need to be more international and governmental pressure?

PWA: I think the best companies are starting to do it [enforce best practise] now anyway as part of there social licence to operate, because they realise if they don’t do it, if they only pay lip service to it, they are going to get communities or international communities saying no and there have been several examples recently where major mining projects have been affected by communities saying no. So the big mining companies are really taking it on board.

In an attempt to shed its reputation as an environmental polluter, the mining industry is increasingly deploying greener technologies to ensure its operations are more energy efficient and have a less degrading impact on the environment.