Mining operations are infamous for the damage they can cause to the environment: leaching nutrients from the soil, destroying natural vegetation which prevents soil erosion and leaving behind unnatural pollutants. For this reason, mines are usually required to replace the damaged land, as well as manage its re-vegetation and the recreation of a viable habitat for wildlife using native plant species.

Until recently, petroleum-based polymers have been widely used to help establish newly planted vegetation in land restoration and re-vegetation processes for post-mining operations.

The University of Queensland (UQ) has developed a new technology to support plant growth at mine sites previously unable to support any vegetation due to heavy metal soil contamination.

However, these fell a long way short of an all-encompassing restorative solution for mined land. Now, though, an exciting new alternative has emerged from Alaska, the US state world-renowned for both its extensive mineral reserves and the fragility of its bountiful natural wilderness.

The ground-breaking research has been spearheaded by the US Army Engineer Research and Development Center’s (ERDC’s) Environmental Laboratory in Vicksburg, Mississippi, where federal researchers Dr. Steven Larson and Dr. Kent Newman invented and developed a biopolymer technology – known as Agriplier – as a natural, ‘green’ alternative to artificial, petroleum-based soil restoration polymers.

According to the researchers: "Most petroleum-based polymers do not have the combined properties of water retention, phytotoxic metal fixation, biodegradability and increased root development that the biopolymer has. In addition, the biopolymer is produced in a sustainable manner from completely natural materials."

The biopolymer is made by encouraging bacteria, naturally occurring in root systems of plants, into hyper-producing a polymer produced naturally in the root zone of certain plants, the functions of which include surface adhesion, water retention and nutrient accumulation. The end result is a very dense concentration of this natural enzyme which can be used for rapid soil amendment. The biopolymer has been shown to increase the germination rate and growth (as well as drought resistance) of grasses and nursery seedlings.

Larson explained that the biopolymer is "a natural soil amendment (already present in many soils, since it is derived from R. tropici, a common soil bacteria) developed by studying plants and their root zone bacterial systems, and learning how to recreate and enhance that system in laboratory and industrial systems," pointing out that they are simply taking advantage of a natural material.

"In most cases, an aqueous biopolymer solution is applied to soil," he continued. "The potential for saturation and excess nutrients in the soil is very low as the application rates of the material and the amounts of nutrient in the biopolymer solution are low." Researchers also asserted that the benefits provided by biopolymers will be both environmental – by preventing metals leaching while accelerating root zone development – as well as financial, because these benefits are expected to reduce the level of maintenance required at mining sites.

The biopolymer is clearly a step in the right direction in terms of ‘greening’ mining operations and last year, at the 2011 Sustainability Awards – designed to recognise and reward excellence within the American Armed Forces in making the US environmentally sustainable – the ERDC was awarded the first ever Corps of Engineers Sustainability Award in the Green Innovation category, for developing this alternative to synthetic soil modifying polymers. 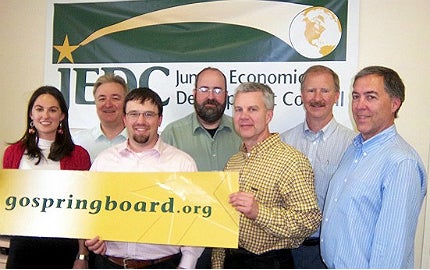 SpringBoard aims to spread the use of biopolymers through cooperative research and development agreements (CRADAs) with a number of mining and agricultural companies.

Alaska’s Juneau Economic Development Council (JEDC) is at the forefront of the North American biopolymer applications. As a partner of the US Department of Defense (DoD), the council’s national technology transfer programme, known as SpringBoard, was created to develop partnerships that result in the transferral, commercialisation and transition of technologies developed by DoD laboratories and private industry, as well as support and facilitate K-16 (upper levels of high school in the US) educational programmes in science, technology, engineering and mathematics.

SpringBoard aims to spread the use of biopolymers through cooperative research and development agreements (CRADAs) with a number of mining and agricultural companies. To this end, the programme has already set up CRADAs between the ERDC and two Alaskan mines: the Fort Knox open pit gold mine in the country’s north-eastern Fairbanks mining district, along with the Kensington underground gold mine, located about 45 miles north of Juneau in south-east Alaska.

Zach Wilkinson, Technology Transfer Associate at SpringBoard, noted: "These CRADAs with ERDC are opportunities for the mines to interact with the labs to test and evaluate the biopolymer in settings and ways that are specific to their particular operations. Because the technology is so new, these CRADAs are relatively open-ended."

Are rock-eating bacteria the key to solving the problem of toxic mine tailings?

Wilkinson also pointed out that there is clearly huge potential for the biopolymer to be used as a soil restoration agent, but because it was not originally developed for the mining industry, the general idea of these CRADAs is to determine just how valuable it could be to the mining sector. As part of the CRADAs, the mines will test the biopolymer not only for re-vegetation, but also other potential uses including aerial seeding, soil stabilisation and dust control.

Cooperative research programmes with Alaskan students are also being used to ascertain the extent to which the biopolymer can aid soil restoration and re-vegetation processes. In one example of this cooperation, two Juneau high school students will conduct a test using Agriplier for their school’s 2012 Science Fair, in collaboration with biopolymer expert Environmental Technology Solutions (ETS), partners in the commercialisation of Agriplier. The project, which will individually test each species of plant used in re-vegetation efforts by mines in Southeast Alaska, aims to determine which species will or will not respond to biopolymer application with increased growth or germination rates.

All this bodes well for the re-vegetation of soil negatively affected by mining and other operations, with Larson and Newman concluding: "We believe that this technology could become a significant aspect of sustainable mining.

Could the world’s most advanced portable gas lab have helped the rescue mission at New Zealand’s Pike River Mine?

Keep Your Mine Operations Flowing