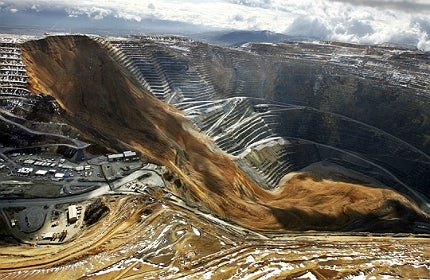 The two deadly landslides at Indonesia’s Grasberg mine complex last month served as a stark reminder of the importance of slope failure monitoring.

Prevention is key, says laser scanning specialist 3D Laser Mapping, whose SiteMonitor solution has helped save the lives of workers around the world, including those at Kumba Iron Ore’s Sishen mine in South Africa.

And now, the company is working on a new project, in partnership with the UK’s Durham University, to integrate ‘full waveform’ data processing into the product that will not only detect slope movement, but predict landslides long before they occur.

Here, 3D’s Dr Ashraf Afana explains how the project is progressing after receiving £1m in government funding earlier this year.

Sarah Blackman: Why was this particular project chosen to receive a government grant?

Ashraf Afana: From a strategic point of view, the main objective of Knowledge Transfer Partnerships is to push to help small companies in the private sector that are trying to improve their competitiveness in the market.

3D Laser Mapping is the leader in laser technology and we have projects and customers in all the continents, so the government believes that helping companies like ours will benefit the UK economy and society both directly and indirectly.

SB: Why did 3D team up with Durham University?

"Landslides at Indonesia’s Grasberg mine complex served as a stark reminder of the importance of slope failure monitoring."

AA: This year, Durham University’s geography department was classified as the third-best in the UK and the fifth-best all around the world.

The university has a lot of experience in the use of full waveform data that generates from laser scanning in engineering geology.

They also have experience in predicting slope failures, as well as time-series analysis and rock slope monitoring in non-mining activities.

So, all of these things make Durham University one of the best sources of technology needed for 3D to enhance its SiteMonitor technology.

AA: Basically, SiteMonitor is a simple laser-based monitoring system that warns of dangerous slope movements. If SiteMonitor detects movement in a certain point – in this case, the rock face – an alarm will be activated automatically.

SB: Can you recall any incidents where the SiteMonitor product has saved lives on a mine site?

AA: I began with 3D Laser Mapping last September and during my time at the company, we have indicated displacement and in some cases an alarm has been activated, but no serious slope failures have been registered.

However, I have been told that in the Sishen gold mine in South Africa, which is really co-efficient, there was a detection of movement and the SiteMonitor was active and efficient in reducing danger and saving lives.

AA: Conventional laser scanners measure the range between the object and the scanner. With full waveform, we can register not only range measurements but radiometric measurements which represent the state, movement and deformation of the object.

"3D Laser Mapping is the leader in laser technology and we have projects and customers in all the continents."

The laser has a bell-shaped distribution, and with full waveform, you can see changes in this bell shape according to the state of the object. With this technology, we are aiming to study the deformation of rock faces and then try to integrate this technology in a slope failure model and estimate the time of failure.

With the current state of the SiteMonitor, a threshold is decided by technical engineers at the mine for when an alarm should be activated and evacuation should begin. This estimation is of course related to several structural and geotechnical studies in individual mines.

But with full waveform, we are talking about prediction, so if I have enough data I can predict the statistical significance of when slope failure is going to happen. It not only gives time, but also gives solutions to technical engineers before a slope failure occurs.

SB: How soon will this new product become available to the mining industry?

"Sharing experience between mines is important to establish clear mitigation strategies for each individual mine."

AA: In September we began contacting mines to ask their permission to use this new technology and we are now in the second phase and we are collecting the data from mines in Namibia, South Africa, Canada and South America, so we can begin to analyse the data.

We will present papers to workshops and congresses being held this year and we have initial results that are very, very encouraging.

I think that at the beginning of 2015 we will launch the product on the market.

SB: Other than using laser monitoring technology, how else can miners mitigate landslide risks?

AA: We encourage the integration of other technologies and awareness of safety procedures for all people who are in contact with the mine – not just the workers.

Also, sharing experience between mines is important to establish clear mitigation strategies for each individual mine and the country in which those mines are located.

The Latin American mining sector has experienced a huge boom in the last decade, bringing with it economic development and improved GDP.

Mining in Mongolia: a risky business?

A wealth of proven resources has attracted mining giants from across the globe to Mongolia.