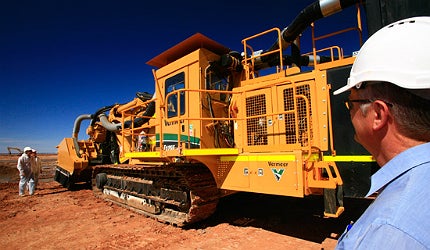 "The gold-mining town of Thabeikyin was close to the epicentre of the quake."

An underdeveloped mining region in northern Myanmar was rocked by a 6.8 magnitude earthquake on 11 November, leaving at least 12 people dead.

The gold-mining town of Thabeikyin was close to the epicentre of the quake and reported three casualties, 35 injuries and damages to 102 homes, 21 religious buildings, 48 government offices and four schools.

A local administrative officer in Sintku Township told The Associated Press that six people had died in the area and another 11 were injured.

The South Australian government had earlier demanded BHP proceed with its plans to extend the mine by next month or be forced to restart the approval process.

The miner now has until October 2016 to start work on the mine expansion, which was shelved due to a weak market.

Despite this latest development, BHP Billiton CEO Marius Kloppers said on 13 November that the company could not guarantee the project would proceed.

The Queensland Resources Council (QRC) reported that the region’s coal industry has lost between 4,000 and 5,000 jobs during the last few months.

The Western Australian government said it is considering alterations to legislation which allows mining companies to deduct royalties from their mining tax.

A gas explosion at the Xiangshui coal mine in Guizhou province of south-west China has killed 23 workers.

Eighteen workers were confirmed dead after the incident on 24 November, but rescuers said two days later that they had recovered the bodies of four missing miners. Five other miners were injured.

According to local authorities, Pannan is required to compensate every miner killed in the accident with 1.04 million yuan ($166,000), the highest set for work-related deaths.

Situated 30km from Wiluna, the project is an advanced uranium mine awaiting environmental approval from the Australian Federal Government.

The company expects final approvals this year and estimates 1.8mlbs of U3O8 output annually during the 14-year life of mine.

State-owned Russian Technologies (Rostekhnologii) said it will divest a 45.42% stake in titanium giant VSMPO-AVISMA for $970m.

Cyprus-based Nordcom, a joint venture between the management and Russia’s Gazprombank, will purchase the stake in the titanium company for $187 a share.

Combined with Nordcom’s earlier shareholding of 4.6% in the firm, the JV will own a 50.1% majority interest in VSMPO-Avisma.

Rostekhnologii will be left with a blocking stake of 25% plus one share, which allows the state corporation to veto decisions by the VSMPO board of directors.