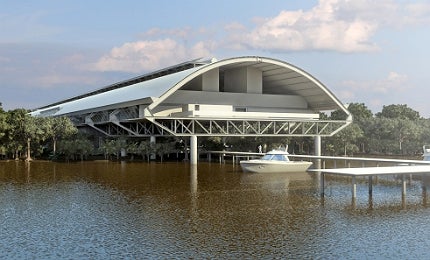 In 2009 Vale launched the Vale Technological Institute, known as ITV, in Belém, Brazil, which through scientific research for new technology, seeks to expand its knowledge and business in a sustainable manner. The Brazilian mining giant says its technological solutions are focused on environmental protection, with more efficient use of natural resources and reduction of emissions from pollutants.

In June 2012, Vale obtained the preliminary environmental license for the iron ore project S11D at Carajás in Brazil, the largest iron ore project in history. Located in the southern range of Carajás, in the Amazon region, the project has a capacity of 90 million tons of iron ore each year.

Operations are expected to start in the second half of 2016 and the company says it will be employing a number of processes to mitigate the enviornmental impact of mining in one of the world’s most ecologically vital areas.

One example is the processing of iron ore using its natural moisture, known as dry process. Additionally, once the S11D mine and plant are operating, Vale estimates there will be a fall in the use of water and fuel consumption, allowing for a 50% cut in greenhouse gas emissions, compared to conventional methods.

Ozge Ibrahim: Vale’s largest operation is located in the Amazon region. What is the environmental impact of mining in one of the most ecologically important and sensitive areas in the world?

"If you look at the impact of mining, it’s very modest, compared to any of the other activities that take place in the region."

Luiz Mello: All licensing processes in Brazil are very stringent. Before any licence is issued, all of the local communities are heard.

There are not only immediate actions to consider, there is also continuous work developed in the lifetime of the project and again as it is terminated. That specific area [Carajás] has a very small impact in the rain forest and over time, work has improved to minimise as much as possible the impact in terms of trees cut.

For any tree the project cuts, it is mandatory for new areas to be re-forested or protected. If you compare the revenue by area impacted, mining by far generates the least impact, in relative and absolute terms. If you look at the impact of mining, it’s very modest, compared to any of the other activities that take place in the region.

OI: Has ITV done any specific work in this region?

LM: There’s a city called Eldorado dos Carajás where Vale’s operations border. Here land conflicts are very frequent. ITV has hired full time researchers to look into the human occupation of the Amazon. We are developing ideas on how we may learn from past mistakes and how we can implement best practice in further economic development that takes place in the region.

Going back to the ITV in Belém, one of the potential economic activities in the region is coco plantation. Of course, Vale will not become a chocolate producer but we are considering developing projects that will mean families are offered help in local business.

These are partnerships with Brazilian organisations and European chocolate makers. It’s about the notion of shared investment, shared risk and shared return.

LM: One example is Mozambique. We have a strong interest there and we have started to produce coal. It’s a country where a lot remains to be done and if you look at any index of social and economic development, Mozambique has a long way to go. Largely, education is the reason why. We have a number of initiatives that try to help the country raise these standards.

"All licensing processes in Brazil are very stringent. Before any licence is issued, all of the local communities are heard."

One of the projects involves the selection of Master’s and PHD students to come to Brazil to study their qualifications. This programme has partnered with a state agency in Brazil where Vale has funded a portion of those students. In addition, we are starting a project with the University of São Paulo (Usp), mostly dedicated to improving the standards of the engineering programme there. Vale and USP have also agreed a partneship with Instituto Superior Politécnico de Tete, in Mozambique, to send teachers there.

There are also other programmes involving partnerships between Brazil and Canada. Canada is at a higher standard and we still try to foster cooperation and the mobility of students, to foster long-term relationship between the two countries. This is done through a programme called Science Without Borders, a federal government initiative where Vale funds 1,000 scholarships for Brazilian students to go abroad or foreign scholars to come to Brazil.

OI: What has been the impact of the global economic downturn on the ITV’s work?

LM: We have to hire researchers and we are sometimes in a position to choose from many and have stronger candidates for our institute. That’s one way we benefit but overall, [the downturn] is detrimental. The availability of capital is less and so some of the projects we were considering to implement immediately may have to be protracted.

[The economic downturn] has also made us keener to look for external partners, something that we were already doing in the past. We are looking for not only funding partners from government but also partners in academia or other industries with which we may share risks and potential benefits.

OI: What are the main challenges ahead and how do you envisage making a profit from these challenges?

"These are partnerships with Brazilian organisations and European chocolate makers. It’s about the notion of shared investment."

LM: In any business, it comes down to dollars and the point is that it must be profitable. A number of initiatives may bring additional costs and then our challenge is to minimise those costs and still bring the maximum benefit, and that may not be an easy equation to manage.

A number of the industrial processes are based on the use of strong chemicals or intense energy demand, both may represent the best economic options. However, both of these represent more carbon emissions or water and air contamination. That’s valid for any industry on earth.

Is it possible to mine using those biological processes? What in addition to biology would be available in terms of mining and how can we further use these? In the beginning as with any new technology, it will not be as cost effective as with any existing technology. It’s a challenge to push over many hurdles, and there are a number of examples of this.

OI: You talk about the importance of education, partnerships and scientific innovation. What else do you consider important to the institutes work and long-term success?

LM: Entrepreneurship is a fundamental aspect of these scientific projects and that’s why we work with the Massachusetts Institute of Technology (MIT). Specifically we work with the Sloan School of Economics focusing on sustainability and respect for the environment, a perspective that may lead to longer-term survival for business. We currently have two of our researchers at sabbatical at MIT, and from next year, we should have a number of courses taking place in Belém.

OI: How do you think mining will change in the future?

LM: Mining is not often seen as a high tech activity and that has to do with the intensity of R&D investment. But, nowadays mining can be very high tech. It may involve autonomous vehicles and remote control of an operation hundreds of miles away.

"Entrepreneurship is a fundamental aspect of these scientific projects and that’s why we work with the Massachusetts Institute of Technology."

It still has a long path ahead in terms of allowing other deposits to be mined, deposits that are currently not economically viable because they are at great depths or they have lower grades. In addition, allowing more review of materials represents the future of technology development in mining.

There are not that many ways to tap into the knowledge of different industries. Of course, all our industries try to develop partnerships in terms of academia.

There are strongholds in terms of mining technology with Canada, Australia, SA, the US, Japan a number of countries in Europe and the UK, which has been pioneering in terms of coal mining in particular.

Less often considered are places like Mexico and Romania. With globalisation comes more distributed knowledge, and there is a big challenge that involves tapping into this knowledge and we are trying to tackle this at the Institute.

BRICS mining: the lay of the land

The BRICS nations are the world’s new mining powerhouses, each country a hotbed for innovative projects.

Carrying out specialist drilling in uncompromising environments is what company Major Drilling does best.