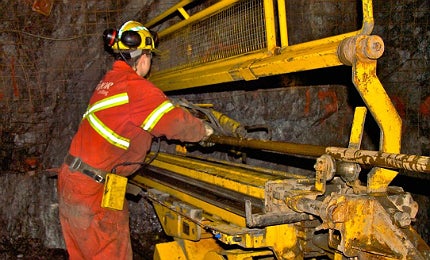 As resources dwindle, mining companies are being forced to mine in ever more remote and obscure locations. These locations can encompass environments with extreme heat, high altitudes, freezing conditions and high winds and therefore require specialist skills and technology to drill beneath the ground, work that can often be extremely dangerous.

Specialist drillers Major Drilling is a global company that hires around 10,000 people and works across twenty countries. President and CEO Francis McGuire tells Mining-technology.com why the company decided to re-shape its business model around this shift in the industry, and how the mining industry will change in the coming years as commodity prices inevitably begin to rise.

Heidi Vella: In the last quarter Major Drilling recorded record revenue figures – up 45% from the same quarter last year – is the industry seeing a boom?

Francis McGuire: Right now, this year has in fact not been a record year for the industry. We are seeing two types of clients: the senior companies and a whole slew of smaller companies that are exploring for mines that depend on the equity market.

"As resources dwindle, mining companies are being forced to mine in ever more remote and obscure locations."

So, the big senior companies have been very active, whereas this year and the year behind us, those junior companies have been really slowing down dramatically because they are finding it difficult to raise money on the capitalist market. So, we’ve done well because of one thing in the market, which is the seniors, the junior market has been going continuously slow.

There is clearly a lack of appetite for real risk in that area, the better projects are getting money whereas the more exploratory high risk companies and projects are still not getting funding – that is the big question for next year – we expect a strong base of activity in the seniors, it’s just how much will we see from the juniors?

HV: Major Drilling was established in the 1980s, what are the key changes you have seen in the industry in that 30 year period?

FM: It really became clear to us in 2001 when we changed our strategy that there is a change.

"There is a secular trend that will occur over time with commodities being more expensive because you have to go deeper."

The mining industry has been driven since the 80s, a lot of mines were discovered with the introduction of aerial survey technology and satellite imaging, so all the mines in the world, all the commodities, anything that was near surface was pinpointed and then you saw a slew of mines throughout the 80s.

Now those mines are 30-odd-years-old they are depleting, so you are seeing the reserves in most commodities dropping, so you have to go and look for reserves in areas that are much more difficult to access. There is a secular trend that will occur over time with commodities being more expensive because you have to go deeper, this happened with oil.

At $10 for a barrel of oil there is no more oil, but $100 a barrel there are all kinds of reserves that can be discovered and developed. In mining we are going through that at a slower pace than the oil companies have but that is happening in our industry too.

HV: Which countries in particular are seeing a growth in business?

FM: It is really all over the world, there is no particular area. There are probably three countries that are somewhat slower and that would be Australia, this is because of a combination of a high Australian dollar, high costs, for example labour cost are out of this world, and on top of that government have increased their carbon tax, super tax and royalties.

Because of those things you see a lot of projects get cancelled and people deciding to invest money elsewhere.

You also have both Mongolia and Argentina who are really not sure where their governments are going and have generally more nationalist policies, so you see a clear slow down of those two countries and Australia, which is a big mining country.

HV: What is the next leap in innovation for drilling technology, and how badly is it needed?

"Basically the perfect employees are farmers: they’re independently minded, they work outside, they work with machinery."

FM: Yes, it’s needed but I don’t see it happening. The problem with our industry is you have three good years, everybody starts spending money or R&D and then you have four bad years and everybody cuts it.

Projects never really have the time to really get off the ground, our revenues and customers can get cut in half in a period of two months and so every time we undertake that sooner or later we get caught in a downturn and overnight you are cutting things again.

So, there is very good reason why there hasn’t been a lot of progress, it’s the very, very temperamental nature of our cash flow, it goes up and down dramatically.

HV: Do you think there are enough skilled staff in the industry?

FM: Oh no. No, it takes three to five years to train people so it is a long training process and very skills intensive, so we face all the skills problems you read about everywhere.

"The problem with our industry is you have three good years, everybody starts spending money and then you have four bad years."

Are there enough people interested in working in the industry? It depends where. You find that in the developed world you don’t, as the typical kind of person we employ, because you’re out there in the bush, you know, standing in the rain / dust / sun whatever and you’re 500 KM away from the nearest city.

Basically the perfect employees are farmers: they’re independently minded, they work outside, they work with machinery, and with urbanisation there are fewer and fewer people available in the developed world.

In a lot of countries that are in development there is a lot bigger population so we find it much easier to recruit in those areas, to find people that will work outside, long hours, physical work. We find it easy to recruit in places like Chile and Argentina, Mongolia, Africa but it is very difficult in Canada, Australia and US.

HV: What are the major hurdles the industry needs to overcome in the future?

FM: It’s the cost, to do a high altitude mine or arctic mine is greater and so there are some tactical challenges which you can over come – there is the technology and people are getting better at overcoming that and so on, but there is one inescapable truth and that is it will be more expensive, you will have to have a sustained level of commodity prices, just like in oil, to maintain that.

Mining in a digital age: Q & A with Wipro Technologies’ Kenneth Matthews

The mining industry is increasingly turning to digital technologies when seeking to streamline their business model and capture reliable data and safety solutions that can then be utilized on the ground.