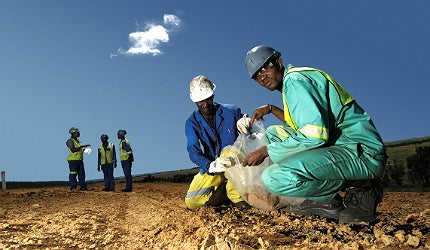 Following a tumultuous year of strikes and labour disputes across South Africa, autumn brought hope that months of social unrest and deteriorating operating conditions might slowly start to improve.

One of the world’s biggest producers, Anglo American‘s platinum subsidiary, suffered huge disruption after three months of wildcat strikes. In a recent statement, the company said the strikes affecting its operations have had “a significant financial impact on the company”, adding that to date, it has lost 191,359 ounces of platinum production from its mines.

“According to Moody‘s predictions, Anglo American’s credit metrics will weaken during the next 18 months.”

Throughout this period of strike activity, Anglo American Platinum said that its Rustenburg operations were under considerable economic pressure and that the strike action was exacerbating that pressure, even affecting their viability.

As the strikes came to an end at the Rustenburg, Union and Amandelbult mines in mid November, following an agreement of a new deal for workers, a spokesperson for the company told Mining-technology.com that the company is confident “production will begin to ramp up over the next week.”

But while operations at the company’s platinum mines may have largely returned to normal, its business is not only suffering from the effects of disputes and strike action, but could also face long lasting damage to its operations and continuing risk from unstable operating conditions.

Earlier this year, professional services company PwC outlined the difficulty faced by the entire mining industry in South Africa, focusing on the effect of poor and unstable operating conditions on market capitalisation.

According to PwC, the diversified companies have replaced platinum producers as the dominant players, raising their share of industry market capitalisation to 40% from 33% last year.

In the case of dominant player Anglo American, credit agency Moody’s has gone further, reporting that high exposure to South Africa has become a “constraint” on the company’s rating following the rapid deterioration in the operating environment in the country.

In September, Moody’s downgraded South Africa’s sovereign rating and in a recent report said that if risks in South Africa heighten, this could exert negative pressure on the mining outfit’s overall rating.

“The company said the strikes affecting its operations have had “a significant financial impact on the company”.”

According to Moody’s predictions, Anglo American’s credit metrics will weaken during the next 18 months, compared with the peak-of-the cycle levels it recorded in 2011. Anglo American’s free cash flow generation is likely to remain negative in 2013 because funds from operations will continue to be below 2011 levels, while planned capital expenditure will still be high, according to its credit focus report.

Anglo American said that while it categorically does not respond to the opinion of credit rating agencies, a spokesperson for the company told Mining-technology.com that the company has a “significant portfolio of world class mining operations and untapped resources that span southern Africa, South America and Australia, presenting a highly attractive diversified investment proposition.”

In other words, they are keen to point out Anglo’s global reach will offset negative analysis of the risks it presently faces in South Africa.

On this point, Moody’s analyst Gianmarco Migliavacca says: “Anglo America’s management will need to further leverage the strengths of its iron ore and thermal coal businesses in South Africa, as well as its most profitable businesses outside the country, such as its copper operations in Chile, in order to mitigate the potential disruption to, and protracted weakness in, its platinum division.”

Risks and the impact of productivity losses

According to Migliavacca, there are also other potential risk factors. “Anglo American would be vulnerable if the government were to, for example, impose higher taxes on mining profits as an alternative response to calls for the nationalisation of mining resources. Anglo American’s South African operations are also exposed to other event risks, such as wage increases and productivity losses due to recurring industrial action, as well as ongoing litigation related to medical claims”.

He adds that the recent exit of CEO Cynthia Carroll “will also create uncertainty at a time when Anglo American’s management cannot afford to be distracted from decision-making on key projects and the implementation of a plan to turn around the platinum division”.

According to PwC’s assessment, Kumba Iron Ore has already replaced Anglo American Platinum as the largest company by market capitalisation operating in the country.

However, it is worth considering that while Anglo America’s high exposure to South Africa may weaken its credit rating, Migliavacca points out that its platinum division contributed less than nine percent of total earnings before interest, taxes, depreciation and amortization (EBITDA) in the first quarter of 2012.

“We would not expect a protracted disruption to this business, such as a three-month-long strike, to cause significant harm to Anglo Amercian’s overall performance, so long as its South African iron ore and thermal coal operations continue to generate substantial profits and the company maintains a strong liquidity profile,” Migliavacca concludes.

What the future holds for South African mining operations

While Anglo and other big players operating in the country might still have a healthy liquidity profile, economic growth in South Africa more than halved to 1.2% in the third quarter of 2012, largely due to the mining strikes.

“Anglo American’s free cash flow generation is likely to remain negative in 2013 because funds from operations will continue to be below 2011 levels.”

Statistics South Africa reported that “lower production in all mining divisions” led to an almost 13% drop in mining and quarrying output. Economists have warned that overall growth has slowed to its lowest level in more than three years, and the bad news does not end there.

South African mining industry groups and analysts have warned that the sector could see thousands of job cuts and further violent clashes between rival unions, the AMCU and the NUM.

While Anglo American can claim some success for coming to an agreement for new wage terms this year, it must not rule out the possibility for further unrest affecting its mining operations next year. PwC has already predicted a “difficult” year for all South African mining companies, and more retrenchments at mines across the country could follow, in spite of efforts to meet the wage demands of striking workers.

Further social and political unrest remains a risk, making it vital for Anglo American to leverage the strengths of its other businesses worldwide to help mitigate the disruption to its platinum business inside South Africa and preserve its overall rating.

Meanwhile, potentially unstable operating conditions and the possibility of more strike action will mean all miners must assess the viability of their operations inside the country, where even big players face long and short term risk from the numerous social, political and industrial problems inside Africa’s largest economy.

Snapshot: the market for mining in South Africa

The South African mining industry is undergoing a period of transition as it continues to expand its capacity.

Hidden in untapped corners of the world, there are still vast resources to cater for ever increasing mineral demands.

Winning and retaining business in the African mining equipment sector, 2016 – A survey of key buyers and decision makers