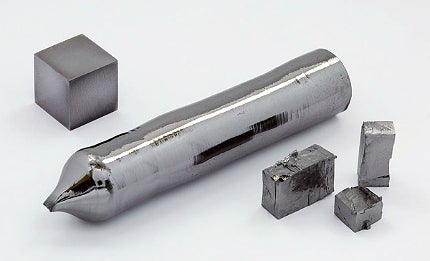 Specialist metals producer, Metalysis, can turn low value metal oxides directly into metal powders in a single step, by introducing oxides into a molten salt bath where it is electrolysed to form metal powders.

Metalysis, which is a spin-off company from Cambridge University, say its process is more cost efficient and greener than other established methods, such as the Kroll process, which uses toxic substances such as petroleum-derived coke, chlorine gas and liquid magnesium, and it has the potential to "revolutionise" the metal production industry.

"Metalysis, which is a spin-off company from Cambridge University, say its process is cost efficient."

As well as tapping into the growing green trend in the mining industry, of replacing old, energy inefficient technologies with newer, more cost effective and environmentally friendly processes, Kartik Rao, business development director at Metalysis, says it offers another business opportunity for mining companies increasingly looking to protect themselves from volatile markets.

Instead of selling off oxides at their current low price, mining companies could turn them into a higher value product to sell on.

"[This] technology could offer mining companies a further option to insulate themselves against the cyclical nature of the commodities markets by entering new and related markets," he adds.

"Instead of selling off oxides at their current low price, mining companies could turn them into a higher value product to sell on."

According to the company, Metalysis powders can be manufactured at less than a tenth of the cost of conventional metal powders.

Rao says the technology has the potential to significantly reduce the cost of specialty metal powder production, meaning previously expensive metals, such as titanium, can be used in a variety of new applications and therefore help to satisfy the high demand for low cost, lightweight, high strength and corrosion resistant metal.

"This technology…has the potential to dramatically drive up global volumes for both of these metals, developing them at lower cost with reduced environmental impact," he adds.

The company, which was first established in 2001, is currently building a prototype production unit which, when expanded, will be capable of supplying two to three percent of the 2,500t of tantalum currently used globally.

This is a $2bn market, according to Rao, meaning "the potential market size for additive manufacturing powders for mass production grades is predicted to be between $130-250bn by 2025."

"The market potential is enormous," he adds.

"Metalysis has had a "very positive reaction" from a number of leading metals and mining companies."

Despite the company being in existence for more than ten years, it is still fine tuning its process for scale up and commercial viability.

Rao says Metalysis has had a "very positive reaction" from a number of leading metals and mining companies, who are "very excited" about Metalysis’s technology and who are seeking partnerships with the company.

Mining giant BHP Billiton is one of the company’s investors who take "a high level of nterest in the strategic direction and development of the company," Rao says.

For now Metalysis, which just appointed a new CEO, Dion Vaughan, is ploughing forward with its new scale up plan. This focuses on simpler and cheaper production cells, which will enable the company to demonstrate its commercial potential.

Once this stage is completed, the company will look to partner with leading metals companies who can help with engineering scale up and market adoption, Rao says.

"The company is already making good progress in securing and developing these partnership opportunities," he says.

As with many start-up green technology companies, the initial development process may be slow, but the eventual, fully invested product could reshape part of the mining industry forever, with global giants such as BHP Billiton incorporating Metalysis technology into its business model.

An equipment management platform for off-highway heavy equipment users, shortlisted for TRANSPORTATION in the 2021 Excellence Awards